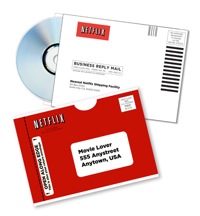 Online movie rental service Netflix just announced that profits rose 45 percent during the fourth quarter of 2008. Looks like consumers feeling the economic pinch aren’t having any trouble digging up $5 to $17 for their monthly Netflix subscriptions. The downturn makes Netflix seem particularly affordable compared to buying DVDs or heading to movie theaters.

Excluding stock-based compensation costs, Netflix earned $24.6 million (so-called non-GAAP profit), or 41 cents per share, beating analysts’ expectations of 36 cents per share. One of the factors driving that profit was a lower “customer acquisition” cost, meaning Netflix spends less money to attract new subscribers, presumably due to those economic factors and growing name recognition. During Q4, customer acquisition cost an average of $26.67, much lower than the $34.58 cost during the same period in 2007.

The news sent Netflix stock up nearly eight percent in after-hours trading, to $32.60. The company predicts revenues of $387 million to $393 million for the first quarter of 2009.

A few months ago, I finally joined Netflix myself, though less because I was afraid of the economy, and more because I don’t want to spend much on DVDs that may soon be obsolete. It looks like Netflix is also in a good position to benefit whenever movie rentals move online in a big way.