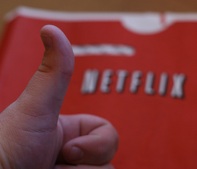 You probably already know this, but the days of going to a video store are ending. Online DVD rental service Netflix announced its earnings earlier today and beat expectations in a number of key categories including profits (up 36 percent) and subscribers (up 21 percent).

This news makes former industry giant, Blockbuster, look even more foolish. Blockbuster, which has been trying to compete with Netflix in the online DVD rental business, has been mired in bad financials for years. Held down by an albatross around its neck, which used to be its greatest assest — its brick and mortar stores — the company is struggling to define itself in the 21st century. A couple weeks ago, it made an almost humorous attempt to buy fellow lackluster company Circuit City. We’re still wondering why that makes any sense.

But not all is great for Netflix either. The company’s stock actually fell despite the good news today because the outlook for the future is less sunny. The cost of building its online movie download service led the company to lower expectations on earnings per share. Netflix could actually find itself in a similar situation to Blockbuster soon as it must transition its business to a new model with the inevitable rise of digital movies.

However, by taking these hits now and putting an infrastructure in place to compete in the digital realm with the likes of Apple and its iTunes movie rental store, Netflix is thus far proving it doesn’t want to end up like Blockbuster.

The race for the living room is on. Apple and Microsoft are already there with the Apple TV and Xbox 360 devices that can stream movies to televisions, but neither are a dominant force yet. Netflix has already said it would team up with LG to make a box to stream its movies to the living room, but today it announced further partnerships in place (it declined to state the other companies aside from LG) to ensure it has a set top box that can grab a foothold.

Blockbuster is said to be entering the living room race as well, and as long as it is there to beat up on, Netflix should be just fine.