Facebook is continually trying to redesign its site to be a better way for people to share information. It’s concerned about increasing competition from other social networks and from sites like Twitter. Its latest effort to do so — a redesign announced and partially rolled out last week — seems to be on the right track, judging by the rising interest among third parties.

A number of large brands have already launched new versions of the company’s advertising feature, Pages (see The New York Times’ version below). These brands are still trying to figure out how to reach web users anyway — so it’s perhaps more significant that StockTwits, a prominent stock-sharing site designed around Twitter, is making its own push to get Facebook users via the new Pages. StockTwits is trying to build a valuable vertical community on Facebook by combining its users’ stock tweets with new Pages features. Note: the new StockTwits Page has yet to be rolled out; the current version is here. 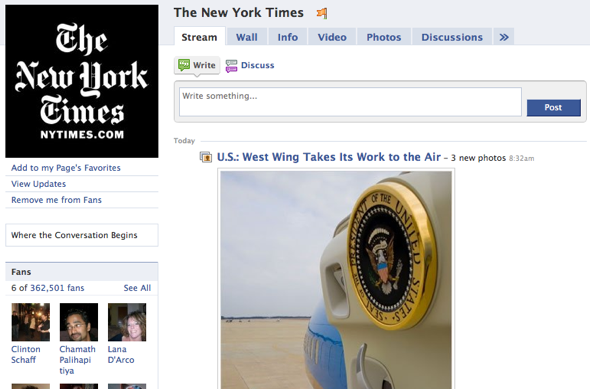 First, it’s important to understand the difference between the old version of Facebook’s Pages and the new one. The old Pages were a sort of user profile-style web page for brands, entertainers, news organizations and other public figures that Facebook users could become fans of. Through existing features, Page owners have already been able to learn more about what sort of Facebook users like them, then message these users to keep them up to date on things like product launches, promotional activities, and other marketing devices. Pages have also been a way for brands to be discovered virally, because when one user joins, an item saying so appears within their friends’ news feeds. These friends are then encouraged to join the page as well. Facebook’s plan is to make money off these Pages by charging Page owners for ads that run within users’ news and in buttons on the site, with information directing users to join the Page.

The new version of the Pages — that StockTwits and others hope to take advantage of — makes sharing and community much easier, while keeping core features intact. The Pages now show a “Wall” of user activity, similar to how Facebook changed its users’ profiles to be last fall. Like the new user profiles, Pages include ways to share photos, videos and other media. Users can comment on items on these walls, which can generate additional stories for friends to see in news feeds. The Page owner can also send status updates from the Page.

The StockTwits Facebook Page will show tweets on its wall about stocks coming from its Twitter-based site, as well as related videos and trends. Users will be able to provide their own information on the feed. But Facebook is also shortly going to integrate all this information from Pages together with its pending redesign for its news feeds. The news feeds are going to update in real time, and you’ll be able to sort them based on type of feed. You’ll be able to see and interact with a live feed of everything happening in StockTwits from within your news feed homepage. The promise is that the Page could help StockTwits reach Facebook users, and their friends, by building on top of its existing Twitter community.

To help it build customized applications for its feeds of tweets and other information, StockTwits is using a new program designed by application developer Buddy Media, called the “Fan Page Management Program.” Buddy Media provides consulting and developer support to build in customized features like Twitter feeds.

Stocktwits is testing out Facebook despite previous skepticism from co-founder and veteran investor Howard Lindzon. Like many people, he wasn’t convinced that third-party applications and fan Pages did a good enough job of reaching users — and instead has chosen to focus on using Twitter’s web-wide messaging capability. Certainly, for online community sites, news organizations and other public communities, Pages could be valuable. You can see this from looking at who the other Page owners are: The New York Times, Oprah, U2 and a range of other public people and groups. StockTwits’ use of a Page as a way to grow a vertically-focused web startup — is an interesting experiment.

Buddy Media already has a business building branded applications (read the company’s guest column on that here), so this program is a way for the company to bring its expertise and applications to a new platform. Facebook is trying to make Page development as easy as possible, so it’s hard to see if Buddy Media will be able to differentiate itself from other development firms or in-house efforts from companies in the long run.

More generally, Facebook Pages, and its new filtering mechanisms, are part of Facebook’s massive ongoing experiment in information-sharing. Expect Pages to continue changing as the company tries to make information sharing easier for users and more logical for brands. Also expect status updates and other information from Pages to be sharable eventually with the rest of the web — user status updates recently became available to third parties, for example. The company is trying to figure out how to let people share both private information (like party pictures between two people who are friends) and more public information (like a status update from a brand’s Page), as Facebook founder Mark Zuckerberg told Inside Facebook’s Justin Smith recently.

The question now is whether Facebook can continue retooling its interface faster and better than Twitter, lifestreaming service FriendFeed and a variety of other companies trying to do much of the same. Zuckerberg and company seem single-minded about being the main way that everybody shares social information on the web.