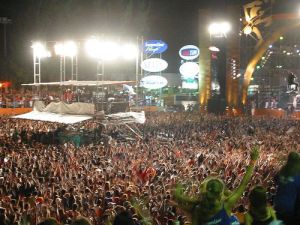 When Facebook made an offer to buy Twitter back in November, it seemed pretty clear it was most interested in the real-time stream of information that is the service’s claim to fame. That deal fell through, but Facebook is moving ahead with the real-time information concept anyway.

A new update to the Facebook homepage will further refine the constant stream of data that is displayed to users. This change, rolling out on March 11, will display posts to Facebook at or near real time in the stream (right now it cycles every few minutes). And perhaps more importantly, the new homepage will feature better filters to handle the huge influx of data that is likely to follow.

There will also be a new “Highlights” feature that will slow the live stream down and focus on the information that you define as being important to you. This, along with the filters, reminds me of two things that the service FriendFeed has been perfecting.

That service, which also imported your information from third-party sites and “Likes” before Facebook, has a lot of information flowing through it, making filtering a must. For those who aren’t constantly watching it, it also features a “Best of” feature that appears to work a bit like Highlights will.

Twitter updates represent a large portion of the data that comes into FriendFeed, and the site serves as a great filter for that data. With today’s update, it seems like Facebook is doing this all in one product. That has the potential to be very powerful, even if the service didn’t have 175 million users.

But it does, as well as something else that has the potential to change the social dynamic of the web: Facebook Connect. That service, which not only makes it easier to use other sites — because you just need your Facebook login — will also make it easier to share information from other sites back to Facebook. If that starts to take off, which I think it will, Facebook could become an even bigger hub on the web than it already is.

“50 percent or more of the users on the site come back to the site everyday,” Facebook chief executive Mark Zuckerberg said at the event today, held at Facebook’s headquarters in Palo Alto, Calif. With these new changes, that number may go down, only because many of the same users simply won’t leave.