FriendFeed, the social content aggregation site has moved some of the new beta features it was working on to the main version of the site today. On the main site you’ll now find friend lists, photo posting, quick navigation, the ability to see other’s feeds as they see them and an updated UI. We detailed all the changes in a post last month.

More interesting however, is that FriendFeed has added a new features with the roll out. Users of the service earlier today noticed that FriendFeed had started bunching together related entries. The feature was taken down for a bit, but now has re-appeared. The service apparently has a new function in place to find duplicate postings (or “dupes”). FriendFeed confirmed it just now in a blog post:

Steve Jobs taught us no announcement would be complete without a compelling surprise to spice it up, so we are also launching one of our most-requested features today: duplicate detection.

When a popular story breaks, like the news about Wall Street this week, lots of people tend to share the same article. With this new noise-reducing FriendFeed feature, when multiple friends share the same link, the set of duplicate entries will only show up once in your feed. 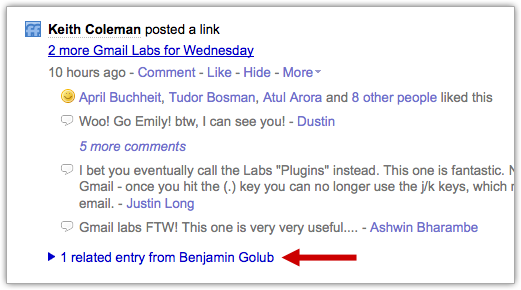 Such functionality, assuming it works well, should help cut down the noise — that is, multiple posts about the same thing — even further. Noise has become an issue on FriendFeed as it gains popularity and thus, more content. I’ve also found that the friend lists feature is helping me sort through information on FriendFeed better.

The FriendFeed beta site is still in action, and I’d imagine we will continue to see new things showing up on that site before they roll live to FriendFeed proper.

Also, FriendFeed’s Simple Update Protocol (SUP) feature, the method it is working on to speed up RSS collection, is close to being rolled out, FriendFeed co-founder Paul Buchheit confirmed to me in an email late last week.

Update: FriendFeed co-founder Bret Taylor described a bit more how dupe detection works in response to a question I posed on FriendFeed:

“We are pretty conservative with dup[e]s and don’t cluster things on the same topic if they are from different places (like VB and the FF blog),” Taylor says.

Below, see dupe detection in action. I posted the link to this story on Twitter, then it came in to FriendFeed through the regular VentureBeat RSS, then another FriendFeed user, Veronica Belmont, re-shared it. All three were clustered together. Brilliant. 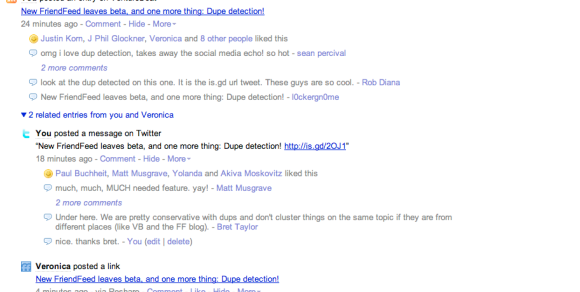