Digg founder Kevin Rose has gotten a reputation as “the boy who cried ‘wolf'” recently with some of his Apple “leaks.” He was dead wrong about many of the specs for the initial iPhone despite having a “source” and then he was wrong again in talking about Apple-built IM/video chatting coming to the iPhone 3G prior to its launch. As such, I was hesitant to write about his latest Apple leaked news this weekend, but he went on the popular podcast This Week in Tech (TWiT) today to talk about it even more — so I’ll put it out there with that big disclaimer.

Rose says there will be an Apple event on September 9 during which it will unveil new iPods and a new version of iTunes. While the entire iPod line will be updated, the major design update will come to the iPod nano, which Rose claims to have a picture of (below) from a source. 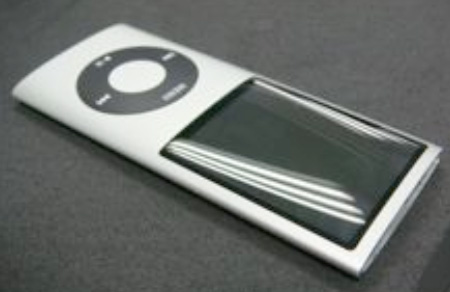 As you can see, the short “fat” version has been replaced by a long “skinny” version. The main feature improvement would seem to the screen, which is now in widescreen format when turned to the side.

While the iPod touch and presumable the iPod classic will also see small changes, the big news for them is that there are big price drops coming, according to Rose’s source. Rose believes is what was meant by the “future product transition” Apple chief financial officer Peter Oppenheimer mentioned numerous times during Apple’s most recent earnings call.

That is certainly possible. While many assumed there would be some kind of new product which hurt Apple’s bottom line, it’s possible that price cuts on new iPods which trim profit margins could be the culprit. Apple’s rationale behind cutting iPod prices would be that at $199, the iPhone is now cheaper than many iPod models which do much less.

On TWiT, host Leo Laporte told Rose the image he had on his blog over the weekend looked like it could have easily been faked, so Rose apparently sent Laporte some kind of picture or document over email to further prove the device’s validity. Rose asked Laporte not to describe it in detail and he didn’t. It all sounded a bit juvenile, but we’ll take their word for the time being that this wasn’t just some joke.

Rose also went into more detail on the show about iTunes 8. Supposedly, the new software will look at all of your music and make new music recommendations based on that, a different source tells Rose. That seems possible as well, iTunes already looks at music you’ve purchased and serves up recommendations based upon that, the next step could be to scan your entire library.

To me, though, that idea is rather ho-hum versus a service like Pandora, which allows you to listen to new music you don’t already have and make recommendations based on that. The problem is that much of the music I have on my machine I might have liked when I was 18, but maybe don’t so much anymore.

Rose also stated he had not heard anything about an “iTunes Unlimited” subscription-based service. That makes sense as it’s probably not coming soon despite recent rumors.

The 2.1 software for the iPhone and iPod touch could be coming as well at this September event.

Again, there is a huge caveat with these rumors that Rose has a track record of being wrong on many of these things. We can’t just sure these rumors aren’t just a way to get readers for Rose’s newly redesigned and relaunched blog — or as a way to pump up his Twitter followers and send users to Pownce (a micro-blogging service he co-founded), which he mentions twice in his video below.

On TWiT, Rose also more and less described his sources on the information and random people who email him — and at one point said “the thing is, these are probably fake.” Also of note is that no one has apparently received an invite to this September 9 event, despite it being just a couple of weeks away.

It has to be noted however, that Rose also been right in the past, specifically when talking about the iPod nano before it launched.

Still, if he is completely wrong yet again, it’s hard to see why anyone would listen to him on these rumors. Even Kevin Rose can only cry “wolf” so many times.