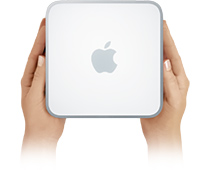 Wasn’t I just saying how unusually quiet it is leading up to the major Apple event, Macworld Expo? Well, it’s not so quiet anymore.

We now have our second rumor of the day about a potential Macworld product launch: A new Mac mini, according to Wired’s Gadget Lab. Interestingly enough, Wired claims its source is an anonymous Apple corporate employee (who I assume is male by the “keep his job” part). The source revealed no details other than the product and the date: January 5, 2009. [Update: Wired has removed the January 5 date, more below.]

But there’s a problem: January 5 is a Monday. While that is the day Macworld is slated to start, keynote addresses traditionally take place on the Tuesday of the week-long event. While no firm date has been set for the keynote yet, an Apple employee also told us that Tuesday was the likely day of the keynote (which, yes, Apple chief executive Steve Jobs will likely be leading despite reports to the contrary).

A few possibilities: a) the Apple employee is just confused and misspoke about the date b) Apple is going with a Monday keynote c) Apple will unveil it the day before the keynote (which seems odd if it is a major refresh) or d) the source is lying about the product and/or being an Apple employee.

Update: Wired’s Brian Chen (the author of the article) just emailed to say that his source didn’t actually specify the January 5 date — that was just him filing in the blanks (since that is the start of Macworld and Apple hasn’t announced a keynote date yet). So that ties up that loose end.

Regardless, an updated Mac mini is a safe guess to make for a Macworld product launch (in fact, I mentioned it in the first rumor earlier today). After all, no other Apple product has gone longer without a refresh of any kind — it is due. In fact, it’s been so long since Apple has done anything with the device, that there have been multiple rumors of the product’s demise. But those turned out to be false.

Wired goes on to layout some guesses as to what we could see in an updated Mac mini including a new aluminum enclosure similar to the new MacBook casings, better graphics chips and a price around $500 for the low-end model. That last part would be very interesting considering Jobs said at an Apple event earlier this year that “We [Apple] don’t know how to build a $500 computer that’s not a piece of junk.”

Of course, it’s not like Jobs has never gone against something he’s said in the past before (see: third-party apps on the iPhone and the iPhone itself). And there are reports of Apple’s sales starting to slip in this troubled economy, even as some other computer makers are seeing a rise in sales.

This rumor follows the earlier one saying that a “iPhone nano” was due to be unveiled at Macworld. The validity of that report has already been questioned numerous times.