Facebook released its company diversity stats in a blog post yesterday. The post, by Facebook’s Global Head of Diversity Maxine Williams, discussed the company’s commitment to diversity — but even she admits Facebook has a long way to go.

Chief Operating Officer Sheryl Sandberg may run the show at Facebook, but she’s mostly directing white guys. Facebook is 70 percent male and 57 percent white, but white guys really reign supreme at the senior level, where they occupy three-quarters of the jobs. 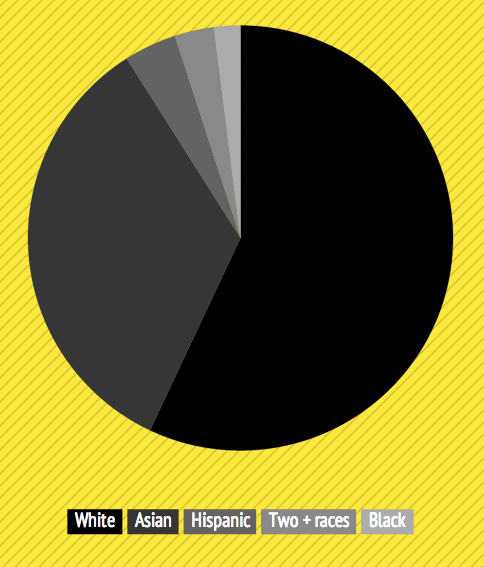 A third of Facebook employees are Asian, and they have a 41 percent hold on tech jobs. A smaller percent work non-tech jobs; and at the senior level Asians hold down 19 percent of positions.

Ladies are well represented in non-tech jobs and even make up 23 percent of senior level positions, but in the tech department women only represent 15 percent of the workforce.

Unfortunately, by industry standards, these numbers are just par for the course. Ten percent or less of Yahoo, Google, and Facebook’s employees are black, Hispanic, “other,” or of mixed ethnicity, according to USA Today. Facebook’s male to female ratio is also almost exactly the same as Google’s, which released its diversity report just a few weeks earlier.

While it’s easy to blame tech companies for a lack of diversity in STEM related fields, the real missed opportunity is in early education. Until educational institutions develop more robust STEM programs for k-12 kids — especially in underserved regions — companies will find their efforts to hire a more diverse staff stifled.