An industry alliance is announcing today a new version of the popular HDMI cables that connect high-definition video appliances to TVs and other appliances. It’s just a simple cable upgrade, but it will mean far easier set-up of Internet-connected devices in the your living room. 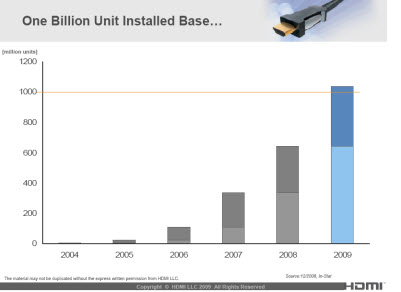 And that means that web-connected devices are going to multiply in homes. Call it cable simplification. Instead of a rat’s nest of cables behind your entertainment center, you can now get by with fewer cables thanks to this new 1.4 version of the High-Definition Multimedia Interface.

More than a billion HDMI connectors and cables have shipped since they were launched in 2004. HDMI connects devices such as Blu-ray player to a TV set with no loss in the high-definition video quality. All new TVs have the HDMI connectors, as do many other video appliances.

The new HDMI 1.4 cables will now let you transfer Internet data along the same cable that currently transfers only video and audio data. That new feature is dubbed the HDMI Ethernet Channel, and, once it’s adopted by the industry, you’ll be able to get rid of the Ethernet cables connecting every single web-connected device. It transfers data at up to 100 megabits per second.

This solves problems for people like me, who have an awful time connecting devices to the web and each other in the living room. I use powerline Internet adapters, which connect my DSL broadband line to my living room via power sockets. Wireless doesn’t work so well in my home. So right now, I have to switch cables from one game console to another whenever I use them. It’s a hassle. 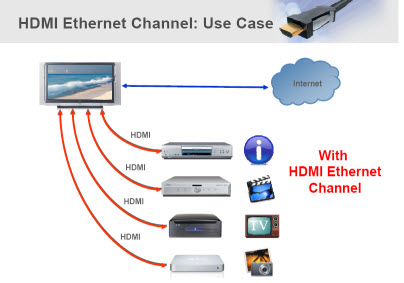 Of course consumers will have to get new cables in order to eliminate some older cables. That’s an added expense and it will take time, maybe years, for the transition to happen.

At least HDMI is keeping up with the times. About 24 percent of all consumer electronics devices will require Ethernet in 2009. With more devices connected to the Internet, this new connector means that you will be able to access your content via the Internet on more of your future home devices. The Ethernet connection enables a variety of new applications, such as the ability to play a video on a Blu-ray player on any web-connected TV in your home.

It also has an Audio Return Channel so you can connect your stereo to your TV and have it play music on your TV set, even as you get rid of a cable. And HDMI 1.4 has Automatic Content Enhancement, which optimizes the settings on your TV to fit whatever movie or video you’re playing. It also has 3-D support and support for higher resolution video of 4,000 x 2,000 pixels. And another new feature is a complete color palette that allows you to connect almost any HD digital still camera and show the pictures with the highest viewing quality on your TV. Sometimes TVs don’t have the breadth of color to display still pictures well.

Still another feature is the Micro HDMI connector. This connector is about the size of a mini universal serial bus (USB) connector. It can likely be built into cell phones in the future to let you play back high-definition video recorded with a cell phone camera on a TV. I recently saw a demonstration of that at Broadcom’s offices in Sunnyvale, Calif. It looked pretty cool.

It will be interesting to see the competition that emerges between HDMI and other cables/connectors such as DisplayPort, which links multiple displays together.

Incidentally, this story was under embargo, but PC Magazine accidentally ran its version early. Before it could be pulled down, others reprinted the details. Then the official announcement was delayed until today because it took a couple of weeks longer for the parties to reach consensus.