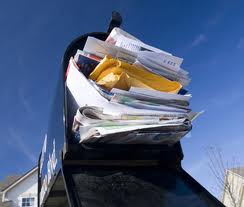 Tonight, Yahoo Mail is unveiling a test version of the big upgrade it has been promising users.

That should be big news for the 273 million users that Yahoo Mail claims worldwide, but it’s also an important move for the struggling company. Mail makes accounts for more than half the pageviews that Yahoo receives in the United States, and traffic has fallen an average of 11 percent compared to last year, according to comScore data reported in the Wall Street Journal. When announcing the revamp in September, Yahoo executives said it was part of a larger strategy for “bringing the cool back to Yahoo.”

David McDowell, a senior director for product management at Yahoo Mail, demonstrated the new product for me yesterday, and it looked pretty similar to what I saw last month.

Besides a new look, McDowell said one of the first things users should notice is that Mail works faster — it should work about twice as fast as the old version, with the biggest improvements when you’re first loading the service and when you’re opening an email. For Silicon Valley users with a broadband connection, the change may not be a big deal, but it could make a big difference for users in other countries, who have a slower experience in general due to their distance from Yahoo data centers.

Yahoo has also added a feature that highlights emails sent from contacts in your address book, helping you catch important messages right away. It looks like a simpler version of the Priority Inbox that Google launched earlier this year, which may lack some of the nuance of Gmail’s approach, but may also help avoid some of the random mistakes that crop up in Priority Inbox. (Though I’m very happy with the service overall.)

The new Yahoo Mail is also better-integrated with a user’s social networks. It already allowed you to share updates with other Yahoo users and to view and publish updates to Facebook, and now it’s integrated with Twitter, too.

I asked if this is something people are actually using (other efforts to add social networking features to webmail haven’t really taken off, with Google Buzz being a particularly notorious example). “We already have millions of users engaging in the activity stream,” McDowell said. “Do I think it’s going to become a separate social graph? No, I don’t think so. I think it’s a complement.”

The last feature worth mentioning is the ability to view media directly in email, even if it wasn’t actually attached. So if someone includes a link to a Flickr photograph or album in an email, readers in Yahoo Mail can see all of those images without leaving the email. The company has also launched similar integrations with non-Yahoo-owned services like Picasa and YouTube.

Yahoo isn’t the only company to revamp its popular, if slightly stodgy, webmail program. Microsoft gave its Hotmail service an overhaul in May and included some similar features like the ability to view Flickr, YouTube, and other multimedia links inline.

Overall, the new Yahoo Mail looks like a solid product, although nothing blew me away enough to tempt me away from Gmail. (I have a Yahoo account that I never use.) If any of our readers are Yahoo Mail users, I’d be curious to read your impressions in the comments. 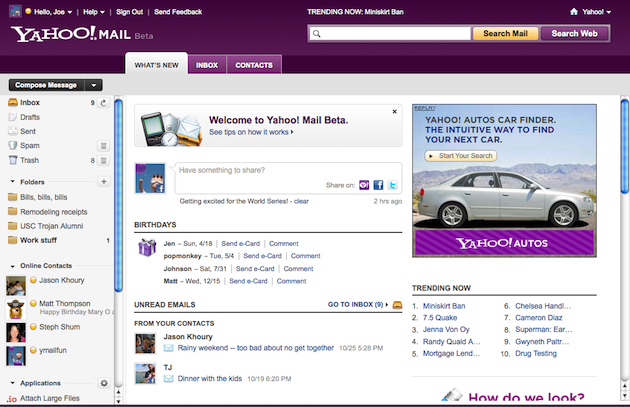