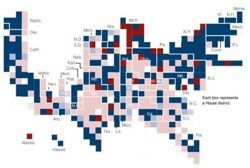 I’ve been quite impressed by The New York Times‘ efforts to expose its data for use in outside web applications. And despite The Gray Lady’s apparently dire financial troubles, it continues to release new application programming interfaces, or APIs. The most recent addition is the Congress API, which allows developers to access data about which congresspeople represent which districts, and how they voted on specific issues.

It sounds like there’s no new data here — it’s all online already, mainly through the House and Senate websites. But who, other than hardcore policy wonks, ever looks up the votes, except perhaps on one or two issues that you care about passionately? Advocacy groups like to compile this stuff and release “report cards,” but hopefully this API makes it possible to build applications where voters can search this data themselves, rather taking someone else’s word about it.

This is sort of the flip side of the first API that The Times (which syndicates VentureBeat’s articles) released last fall collecting campaign finance data. I’d like to see applications that combine the voting and finance information, although MAPLight.org is already doing a pretty good job on this front.

As media companies struggle to survive and to redefine themselves, writers have suggested that organizations like The Times needs to make a fresh case about the value they provide to the world. These APIs, which also include The Times’ movie reviews and comments, are certainly a step in that direction. Right now, the data is available for free, but The Times says it might start charging.