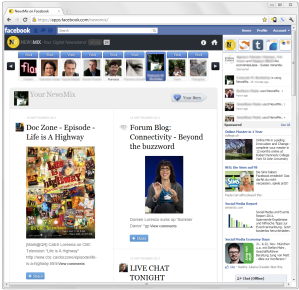 NewsMix launched its Facebook app today, which will allow people to follow posts from their fan pages in one, consolidated digital magazine.

You know the saying “fall through the cracks?” Well, Facebook’s news feed is a content chasm. Interesting posts from your liked pages can fall to the bottom and are often ignored, even though the content might be good. NewsMix takes your liked pages, whether they are news-oriented or not, and forms them into your own curated magazine within Facebook.

“I really think Facebook should fix the problem of … the news feed,” Francois Bochatay, chief executive of NewsMix’s parent company Sobees, told VentureBeat. “What we tried to fix is getting the news in one place. There should be another place for the friends.”

Bochatay showed us his Facebook NewsMix page, which included everything from VentureBeat news articles to posts from AirFrance. When asked why the “personally curated magazine” shows posts from non-news pages, he explained even these companies have interesting things to say. For instance, you wouldn’t want to miss a half-off-on-all-AirFrance-flights post.

The magazine allows you to be the editor, as it does in the web and iPad app editions of NewsMix. These aggregate news from chosen sites, Twitter feeds and Facebook and assemble the information into a Flipboard-like interface. Unlike the iPad and web apps, however, NewsMix’s Facebook magazine lets you view friends’ NewsMixes and like pages you’re interested in directly from their Facebook app.

Bochatay says that NewMix is cross-platform and thus can appeal to more people than Flipboard. The company is helping users deal with the issue of too much data and how to organize it on networks like Facebook. There may be a new competitor in the waters, however. According to Bochatay, Facebook is also trying its hand at news organization, though we do not yet know what form this will take.

NewsMix’s parent company Sobees was founded in 2007 and is headquartered in Switzerland.