Daily newspapers are fighting to stay relevant in the age of online news, and many have made some smart changes. But they’re also struggling because the revenue model is still unclear, according to a new study on “The Changing Newsroom” from The Pew Research Center’s Project for Excellence in Journalism.

The study included surveys and face-to-face editor interviews from a total of more than 250 newspapers. It paints a mixed picture of the newspaper landscape, with excitement about new opportunities offset by fear over declining revenues and standards. Newspapers have become smaller, as have the staffs that produce them, and those staffs are also younger and more tech-savvy. 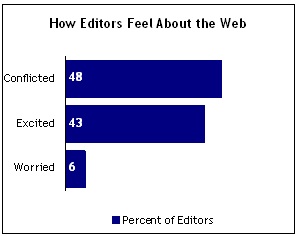 In perhaps the most interesting section, the study looks at how newspapers are adapting to the Web. The changes are numerous. Most promisingly, newspapers are using their Web sites to reclaim the breaking news edge that they ceded to radio and television 50 years ago. Gone are the days when it was enough for a reporter to just finish a story in time for the morning edition; now 42 percent of responding newspapers have added “early teams” to cover breaking news in the morning, and many are timing their deadlines to make sure there’s fresh content at peak traffic times. They’re also adding micro-sites for targeted audiences and staff blogs, and they’re forcing their journalists to create more multimedia content.

Editors, however, gave a mixed response to the changes — 48 percent of them said they’re “conflicted” about the Web, and 63 percent said they still spend most of their time on the print edition of the paper. 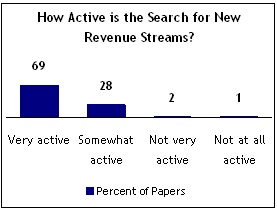 Also, despite the increasing online emphasis, newspapers haven’t really figured out how to monetize their Web sites yet. The study found that 90 percent of advertising revenue still comes from the print editions, and newsroom executives complain that their advertising departments have been slow to shift their focus online. (And when newspaper editors — a group not known for its embrace of the internet — complain, you know there’s a problem.) But at least many respondents said they’re actively searching for new revenue.

Here are some other key findings:

As someone who saw a lot of Web-inspired changes myself during my time at the Hollister Free Lance, I can’t deny that it’s a scary, uncertain time for newspapers. In fact, we reported a month ago that 19 of the top 50 newspapers in the United States are losing money.