If you’ve traveled, you’ve probably found yourself in an unfamiliar city with a day or an afternoon to kill, but lacking any idea of what to do. That’s where a site called nextstop, which is coming out of beta testing today, comes in. You can log onto nextstop and quickly find a list of cool activities that fit their interests.

Granted, nextstop isn’t just about killing a couple hours of time — as an activity guide, it can help users plan longer trips, or to find things to do in their home cities — but that’s the use I found most compelling. Co-founder Carl Sjogreen says one of the inspirations came from trips when he was in a hotel room with a free hour, but no idea what to do. Worse still, he had no idea how to find out what to do.

“I end up flipping CNN on in the hotel room,” Sjogreen says. “But if I knew there was a neat art gallery nearby, I’d be super-excited to kill that hour there.” 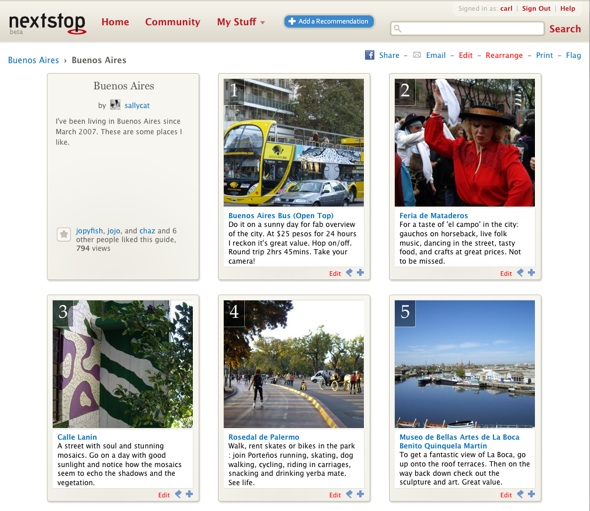 It will be hard for nextstop to get much attention with all the other activity guides out there, online and off, but Sjogreen says none have really mastered the challenge of providing activity information (not just business and restaurant reviews) in an accessible and fun way. (I think Diddit has done a good job building an activity site, and creating social tools encouraging people to explore those activities — but Diddit has a much broader focus, with lists of things like Harry Potter novels.) From what I’ve seen, nextstop is pretty promising on this front, with visually appealing, quick-read lists — about topics such as Exploring The Mission (SF) and Bay to Breakers Spots — that allow me to drill into specific locations or activities, plus an easy-to-use form for providing short recommendations. Integration with Google Image Search and Google Maps doesn’t hurt, either.

Sjogreen says nextstop users have created activity guides covering 1,000 cities in 100 countries. Now that the company is officially launching the site, it’s also improving the social features, with additions including the ability to track the recommendations made by other users.

San Francisco-based Nextstop is self-funded, but Sjogreen says the founders are considering raising venture funding later this year. He plans to make money through advertising.