Tweets drive viewers, and more tweets drive more viewers, according to a new Nielsen study released today. This is the first study ever to confirm that Twitter drives ratings and that a spike in tweets equals a spike in viewership.

In other words, Twitter and TV have a mutually beneficial relationship.

“We saw a statistically significant causal influence indicating that a spike in TV ratings can increase the volume of Tweets, and, conversely, a spike in Tweets can increase tune-in,” Nielsen’s Chief Research Officer Paul Donato said in a statement.

By analyzing minute-by-minute trends, Nielsen says it was able to determine that 48 percent of primetime broadcast TV shows stimulate a statistically-significant increase in related tweets, and that for 29 percent of them, spikes in tweet volume pumped ratings higher. More simply put, people tweet about popular shows, and when lots of them tweet, more people watch. 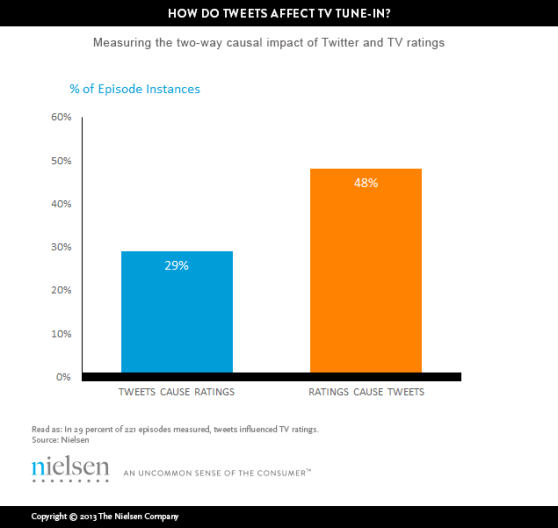 This study, which follows one in March that Twitter paid for but that did not show causality, is a validation of Twitter’s “Amplify” program, which aims to ride the second-screen phenomenon to make Twitter the place for conversations about live media. Twitter is so successful at this program that a staggering 95 percent of “live TV conversation” takes place on the social network, the company has said.

“These results substantiate what many of our TV partners have been telling us anecdotally for years: namely, that Twitter drives tune-in, especially for live, linear television programming,” said Ali Rowghani, Twitter’s Chief Operating Officer. “As the world’s preeminent real-time social communication medium, Twitter is a complementary tool for broadcasters to engage their audience, drive conversation about their programming, and increase tune-in.”

The correlation between TV ratings and tweets is particularly obvious in live, competitive, and engaging TV such as sports, comedy, and reality TV, Nielsen said. In fact, “competitive reality” TV shows — such as The Voice, X Factor, or America’s Got Talent — drive the most significant increase in ratings as a response to tweet spikes: 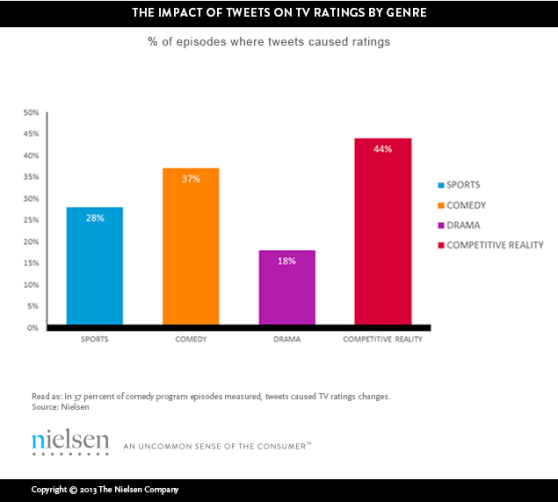 The fact that TV drives tweets is not particularly shocking. The fact that tweets drive TV is much more significant.

This is key to Twitter’s advertising programs, which aim to allow brands to have a seamless presence on TV and Twitter simultaneously, reaching the same people in multiple ways and in multiple places for increased impact.

“We’re allowing marketers to insert their brands seamlessly into the torrent of fan activity and engagement around our networks on Twitter,” Viacom’s head of sales Jeff Lucas said when that company joined Twitter Amplify.

In 2012, before Viacom had joined, its Video Music Awards saw 52 million tweet-votes cast and a peak of almost 100,000 tweets per minute. Clearly, the ratings impact helped Viacom decide to partner with Twitter even more closely, joining other media properties such as Turner Sports, A&E, MLB, and World Wrestling Entertainment.

Twitter’s IPO is probably not far off, and the company has been bolstering its revenue-generation capability with new ad products: demographic targeting tools, keyword targeting options, and of course another Twitter media play, Twitter #Music.

These Nielsen results will help Twitter further enhance those efforts.