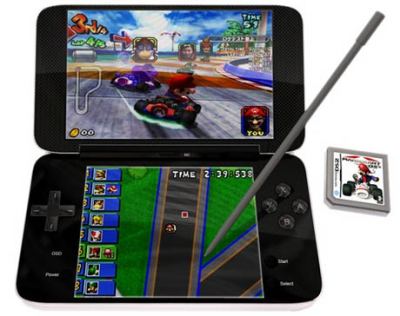 Everything is relative. Sony recently celebrated the sale of 50 million PlayStation Portable handheld game players. But today, Nintendo announced it has sold more than 100 million Nintendo DS handhelds. Both launched in 2004.

The Japanese company said today it shipped the 100 millionth unit on March 6. It is also preparing to release the next version of its handheld, the DSi, on April 5 in the U.S. for $169.

When the DS launched in late 2004, it was bulky and had two screens, including a touchscreen and voice recognition. The Sony PSP launched in Japan later that year and in the U.S. the following spring. At first, the PSP outsold the DS. But then Nintendo shipped a blockbuster game, Nintendogs, crafted by mastermind Shigeru Miyamoto. It quickly took off, revived the game market for handhelds, and reached out to broader audiences beyond hardcore gamers.

Nintendo really began to pull away from Sony when it launched the DS Lite in 2006. The new DSi should help the company, and the overall game industry, by renewing enthusiasm for portable games. The DSi has two built-in cameras, better sound and a mechanism for purchasing games from a store that resembles Apple’s AppStore. This and other features have clearly been designed to ward off the iPhone, which is fast becoming one of the most popular game platforms with more than 6,000 games available.