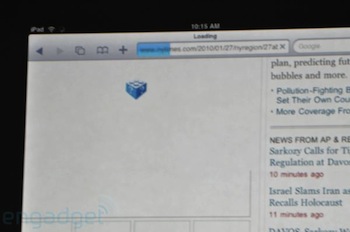 The continuing absence of Flash from the iPhone has been the subject of plenty of debate and speculation. Apple’s main defense has been preserving the device’s performance, and others have noted that Apple probably isn’t happy that so much web content, especially video and games, runs on a proprietary technology from Adobe.

Now, if you think of the iPad as a glorified e-book reader or a larger iPhone, the absence of Flash may not seem like a big deal. But if Apple wants this to be a serious computing device (i.e., an alternative to your laptop, at least in some situations), that’s a pretty big drawback.

The lack of Flash was revealed by a big “plugin needed” sign in the iPad web browser during the on-stage demo, and while I’m willing to tolerate that on my iPhone, it would be awfully frustrating to see on a larger, more powerful device.