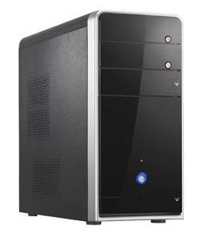 Apple doesn’t allow other manufacturers to build machines that run its OS X operating system software. So when Psystar came out and said it was creating a system that would do just that, you knew it was only a matter of time before the lawsuits started flying. And here they are.

Apple has filed a suit against the Florida-based company today at the federal district court for the northern district of California, according to ZDNet. As one might expect, the suit will be for licensing, trademark and copyright infringement.

Pystar had been attempting to sell computers running OS X Leopard (Apple’s newest operating system) for around $500. Compare this to Apple’s current cheapest computer, the Mac Mini, which comes in at $599 but is significantly less powerful. Apple’s “real” desktop computers start around $1,000.

Apple has long had a closed operating system when compared to a company like Microsoft, which allows its operating system to run on a wide variety of computers (Microsoft, of course, doesn’t make its own computers). Apple briefly adopted a strategy of opening its OS to other manufacturer in the mid 1990s, but as soon as founder Steve Jobs returned to the company (he had been forced out several years prior), he killed those deals.

Interestingly enough, Psystar’s web site appears to be down at the moment.