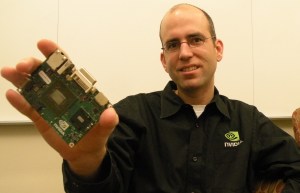 One of the secrets of the fast-growing category of “netbook” computers — the mini laptops meant for email or web surfing only — is that they’re being returned like hot cakes. These slimmed-down computers look sexy, but they can’t really do that much. They hang on a lot of web pages with rich media and can’t play most games.

That’s why graphics chip maker Nvidia is introducing its Ion platform, a chip set with integrated graphics that can be paired with Intel’s processor for netbooks, Atom. (Get it? An ion is a charged atom). The Ion platform uses an Atom chip with Nvidia’s GeForce 9400M motherboard GPU (a graphics processing unit that sits on a computer’s main board, in contrast to GPUs that have their own board on a PC).

Netbooks debuted in 2008 with the launch of Intel’s Atom processor, which was specifically designed as a low-power chip for use in portable devices that are smaller than laptops. Some netbooks also used Via’s Nano processor. The machines sell for $400 to $1,000, sometimes cannibalizing sales of more capable laptop computers. Successful models include the HP Mini and its successor released in October, as well as models from Asus, Ace and Slyvania.

But Intel had to restrict the devices to use its 945Gx and its ICH7 chip set, which had weak integrated graphics performance. Early netbooks had analog displays, SD flash memory instead of hard disks, a standard operating system such as Windows XP or Linux, no DVD drives, and screens smaller than 10 inches.

David Ragones, a product line manager at Santa Clara, Calif.-based Nvidia said that most netbooks with the Ion platform could have 10 times better graphics and video performance. They can run full high-definition video and use a premium operating system such as Windows Vista or Microsoft’s upcoming Windows 7.

The devices can have a rich set of input-output functions. You could plug an Ion-based netbook into a flat-panel TV via an HDMI (high-definition multimedia interface). You can use peripherals via the universal serial bus 2.0 and plug into the wired Internet at gigabit Ethernet speed. You can also add an external hard disk.

In a demo, Ragones showed how the hit game Call of Duty 4 won’t even play on an Intel Atom-based netbook but runs just fine on a machine with the Nvidia Ion platform. If the netbook manufacturers want, they can now add screens with displays that are more than 10 inches diagonally.

The Ion platform may add about $50 in cost to a computer, but it can be used in netbooks that cost as little as $450. Machines with the Ion platform will debut in the first half of 2009. They will be paired with Intel’s Atom chips and will compete against the upcoming Yukon platform from Advanced Micro Devices, which is pairing its own processors with ATI graphics.

What does Intel think about this? Well, the processor team likes it because it’ll help sell a lot more netbooks, but the chip set folks… that’s another story.