If you’re an Olympics-loving web fiend, you’d better sit down: The athletes of the Olympics have finally come together to create a sort of Olympic Village on the web.

The Olympic Athletes Hub will bring the best, most intimate views of the Olympic Games to fans around the world. You want candid photos? Got ’em. Training tips? They’re there. Private videos and real-time status updates from the world’s best swimmers, runners, etc.? You’ll find it all at the Hub.

As the summer games in London begin, you’ll also be able to live-chat with athletes direct from the Olympic Village and see real-time results from the competitions.

All the athletes’ accounts are verified by a couple different agencies, so all the updates, pics, and videos you’ll find at the Hub will be certifiably genuine. 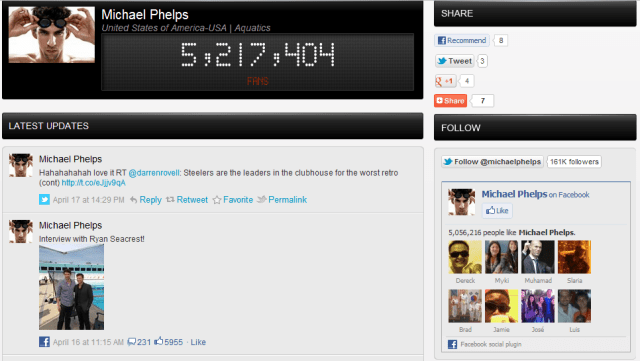 Not only does the hub have information on all the current athletes from the 2012 London games; it’s also got updates from Olympians past, including the likes of Dorothy Hamill and Muhammad Ali.

Of course, it wouldn’t be a social media freakfest without a little gamification. The minds behind the hub tell us, “The more athletes you follow, and content you unlock, the more points you receive, accumulating virtual prizes such as gold, silver and bronze medals from past Olympic Games, as well as real-world prizes which will be awarded as the countdown to the London 2012 Olympic Games continues.”

Technology and the Olympics, surprisingly enough, go together like cream cheese and smoked salmon. Yes, the geeks and jocks are vastly different, but our common ground is inspirational, and it makes sense that we’re constantly finding new ways to use technology to appreciate and participate in the Olympics.

The Olympic games were first broadcast on television in Rome in 1960. The organizers of this year’s games (and the corresponding social media hub) are calling 2012 the first year the games have been truly social.

“The Olympic Athletes’ Hub was born out of our desire to connect Olympic athletes and their fans more intimately than ever before,” said Alex Huot, social media chief for the International Olympic Committee, in a release.

“With the launch of the Hub, we are creating a paradigm shift in the communication around the Olympic Games, and we are excited to offer this opportunity for greater engagement and interaction between Olympians and their fans.”

The IOC does have some fairly strict guidelines about what can and can’t be posted online by Olympic participants during the games. Hopefully, this hub will be a way to aggregate and promote the “good” content for an eager global audience.