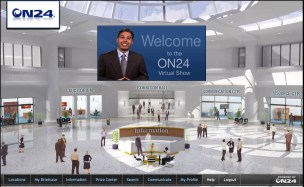 Virtual trade shows are catching on, according to one of the leading companies in the space.

San Francisco-based ON24 says it grew sales 40 percent in 2008 and saw its client base expand to 700 customers. (It didn’t disclose exact revenues.)

Sharat Sharan, its chief executive, said that companies trying to reduce travel costs are looking for alternatives, and that virtual shows — where attendees meet in a virtual world where the main object is to engage in business communication — are a much cheaper option. Incidentally, about 76 percent of On24’s customers say they’re replacing physical events with virtual events in 2009.

ON24 isn’t just blowing smoke. Sony Electronics held a trade fair last month for its high-end broadcast equipment business, and also declared that it would expand its virtual trade shows at the expense of physical events because of the greater efficiency, lower cost, and need to serve customers better during the recession.

Last year, ON24 raised $8 million in funding, opened Asian headquarters in Singapore, expanded its sales and marketing operations, and invested heavily in infrastructure (like a second data center). The company offers its clients a variety of ways to stage shows, including on-demand streaming webcasts using Adobe Flash technology, and even virtual events on mobile devices.

ON24 says it will hold 6,000 virtual events in the first quarter alone. The company has 160 employees, including a big support team and 32 research and development personnel in San Francisco. It has raised $46 million to date. Rivals include InXpo, Unisfair, TalkPoint, BrightTalk and StreamLogics.