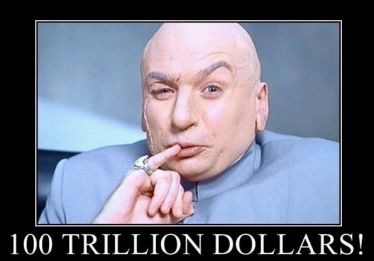 A company valued by its private investors at $1 billion, with nary any revenue in sight?

But the company — and its investors — must have justified its value somehow. Earlier this summer, leaked company documents showed Twitter was gunning for 1 billion users in 2013 — a user base that would make it the largest site in the world.

That was the result of a thought exercise, co-founder Biz Stone told us in an interview earlier this year.

“We started with a very broad idea that the open exchange of information has a positive impact on the world,” he said. “Then we worked backwards thinking that if there’s more than 6 billion people and 1.5 billion web users, what’s a crazy number of users that we could grow the company to for that vision and that would work for us?”

The company’s lofty goal underscores the company’s ambition: It turned down an offer from Facebook last fall and its founders showed no inclination to sell and return to their former employer Google. (Note: Facebook — which is also letting users post micro-updates — is now saying Twitter is “in the rear-view mirror” and suggests Twitter’s growth may have stalled.) So it makes sense that Twitter would raise a large amount of capital to keep itself independent. (Stone added that the company has revisited those original user goals, but declined to say where they were re-pegged.) Twitter already has raised $55 million, so a new round of a reported $50 million would bring the total to $105 million. It would also bump the company’s valuation by fourfold from a previously reported $250 million.

Of course, with that comes great expectations. Twitter has a few immediate cards up its sleeves to earn income. It intends to roll out paid commercial accounts later this year. A few other unconfirmed revenue possibilities include selling ads against the company’s search results or providing market research and sentiment analysis for companies that want to figure out what people are saying about their brands. Stone said charging third-party developers was not on the table.

Once you have the user traction (which Twitter does with 21 million U.S. visitors in July according to Comscore) and a specific revenue model (less apparent), how do you get to the valuation? Venture capital investors usually establish a valuation by looking at similar companies out on the public market. Therein lies a problem: no social networking companies have gone public in the U.S. since the tech bubble imploded.

Think about that for a second: the largest estimate is twenty times the size of the smallest one.

It all goes to show that valuing early-stage companies is like taking a shot in the dark, especially in a field where the public markets provide no cues and other comparable private companies are only beginning to reach profitability. As much as investors and observers try to provide a definitive answer, this is as much an art as a science.