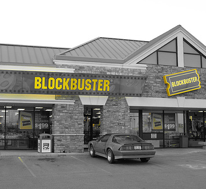 Netflix continued its assault on the living room today by announcing a deal to put its “Watch Instantly” content on TiVo digital video recorder boxes. This follows similar deals with the Roku living room set-top box, select Blu-ray players and the forthcoming update to Microsoft’s Xbox 360 gaming console. These deals make it clear: Netflix understands where the home movie renting and buying business is heading — online.

Watch Instantly is the name of Netflix’s streaming video service. It is free to almost all Netflix customers (ones paying for more than the bare-bones plan) and features over 12,000 movie and television titles. It started out as being a PC-only service, meaning users could only access it on their Windows-based computers. But now, with the content being spread quickly to the living room through the various aforementioned means (and via Apple computers, which Netflix is finally testing its service on), it is much more compelling.

Imagine video on demand — but on steroids — and for free (again, assuming you have a Netflix account, which is already a good deal in and of itself). Sure, it doesn’t have the newest titles at first, but that is what your regular Netflix account is for. (You know, the one that still uses the United State Postal Service.) And if you really need to have the latest movies instantaneously in your living room, you can supplement any of these players with a device like the Apple TV. Or maybe even better, just use the Xbox 360, which will not only have Netflix content, but gives you access to new movie downloads via Xbox Live as well.

Speaking of the Xbox 360, there is even another bonus for users who have the sytem: Netflix content on the console will be the first available in high definition. It’s these features, along with the fact that it’s a very good gaming system, that give the 360 an advantage in the war for the living room.

And it could be a Microsoft mistake that has led to its lead in the digital living room. Because Microsoft got the Xbox 360 out the door quickly (a year before the other gaming consoles of its generation), it did not include a next-generation digital video disc player. Microsoft instead opted to have an HD DVD add-on for the 360, and so when that format lost to Blu-ray as the high definition disc of choice, it wasn’t that bad for Microsoft. And now instead of opting to add a Blu-ray player (which Sony’s Playstation 3 has built-in and partially led to its high price), Microsoft seems to be going head-on into the digital distribution methods of video. 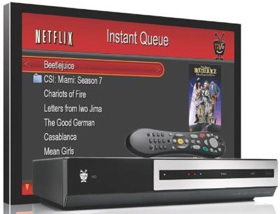 Microsoft rival Apple is also opting not to go the Blu-ray route yet. At Apple’s recent event to unveil its new MacBooks, chief executive Steve Jobs called the format “a bag of hurt” because he saw it as far from a clear-cut winner in the eyes of consumers. He too believes in and has bet heavily on the online digital means of movie distribution, which the iTunes video store relies on.

So that is Netflix, Microsoft and Apple all moving towards or firmly in the digital distribution camp. One company that is doing a less than stellar job getting its digital act in order is Blockbuster. The company that was once synonymous with movie rentals picked right in backing Blu-ray over HD DVD before the format war was over, but it failed to see that the third candidate, digital distribution, would be the ultimate winner.

Sure, it bought the online movie distribution service Movielink, but it took the company forever to get it working with its Blockbuster main site. Now it does, but unlike Netflix’s wide variety of free content, you must pay for Blockbuster digital content — and it is still PC-only, while not working on any of the popular set top boxes that Netflix now finds itself on.

Digital distribution for film isn’t going to become the norm overnight — the DVD format is still far more popular — but it’s becoming more and more clear that it will eventually be the norm at some point. It’s entirely possible now that Blu-ray will never catch on and that the masses will skip to the lower-quality, but easier to obtain digital film formats available on the web.

Netflix is smart to spread its digital content to many boxes in the living room. It will ensure its existence as the disc formats of old fade away. Blockbuster already failed once to get in front of an industry change — from in store movie rentals to online by-mail rentals (which, of course, Netflix made popular) — now it may find itself in the same position with the next transition of the industry. This time, it will likely kill the company.