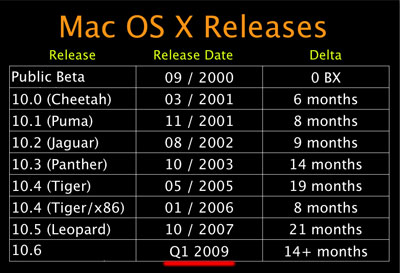 The next version of Apple’s OS X operating system, dubbed “Snow Leopard” is slated to come out next year. When an early build was shown at this year’s WWDC event in June, Apple indicated that it would be available to the public in about a year. However, a new slide from a presentation given by an Apple director indicates it could be sooner, MacRumors reports.

Specifically, Apple’s director of Unix technologies engineering, Jordan Hubbard, put up a slide at the LISA ’08 conference that showed a Q1 2009 release date for OS X 10.6 — aka Snow Leopard.

Assuming the information on the slide simply isn’t old (the Snow Leopard name isn’t listed for example), that means it’s certainly not out of the realm of possibility that Apple could announce or even unveil the new OS at its big MacWorld event in January.

Rather than emphasize revolutionary new features, Snow Leopard is said to focus on performance and stability. Again, this makes it plausible (though maybe not probable) that Apple could wrap it up a bit early.

An early launch would also give Apple more time to get the jabs in against rival Microsoft, which is stuck with Windows Vista until Windows 7 is ready to go (likely later in 2009).