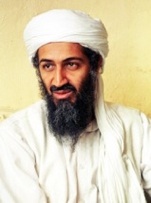 I thought for sure the ten millionth “death of Twitter” meme over the weekend would be the most ridiculous item about the popular micro-messaging service. Then I read the report [PDF] about terrorists potentially using Twitter to spread their evil.

Basically, a new intelligence report by the Army’s 304th Military Intelligence Battalion lays out several scenarios in which terrorist networks could use new and upcoming common technologies for malicious purposes. Certainly, the easy access to digital maps on the go and GPS capabilities are potentially powerful both for good and bad things, but when the report breaks off into a tangent about Twitter, things start to sound a bit wacky.

Specifically, there are three scenarios for using Twitter as a terrorist tool, as Wired points out:

Scenario 1: Terrorist operative “A” uses Twitter with… a cell phone camera/video function to send back messages, and to receive messages, from the rest of his [group]… Other members of his [group] receive near real time updates (similar to the movement updates that were sent by activists at the RNC) on how, where, and the number of troops that are moving in order to conduct an ambush.

Scenario 2: Terrorist operative “A” has a mobile phone for Tweet messaging and for taking images. Operative “A” also has a separate mobile phone that is actually an explosive device and/or a suicide vest for remote detonation. Terrorist operative “B” has the detonator and a mobile to view “A’s” Tweets and images. This may allow ”B” to select the precise moment of remote detonation based on near real time movement and imagery that is being sent by “A.”

Scenario 3: Cyber Terrorist operative “A” finds U.S. [soldier] Smith’s Twitter account. Operative “A” joins Smith’s Tweets and begins to elicit information from Smith. This information is then used for… identity theft, hacking, and/or physical [attacks]. This scenario… has already been discussed for other social networking sites, such as My Space and/or Face Book.

Okay, let’s break this down. First, in Scenario 1, the terrorists are likely to bitch just as much as Twitter’s regular users do because Twitter doesn’t actually have a method to send group messages. You can send them to one person or to the entirety of Twitter. But if a terrorist did that, its plan would be completely out in the open — even in secret code, that seems a bit risky. Perhaps the terrorists should consider Yammer for its group messaging functionality.

I’m not even going to go into the camera/video function part. Twitter can send 140 text characters. Maybe the terrorists plan on using the third-party Twitter iPhone application Twinkle (which can attach pictures to tweets)?

In Scenario 2, I’m not sure why “Tweet” (a Twitter message) is capitalized, but whatever. The real question here is why would a terrorist ping a suicide bomber on Twitter? Why not just use a text message which would be just as instantaneous — and again, not public? Why not use mobile instant messaging? Hell, Qik, with its live video streaming, sounds like it would be perfect for this scenario, but not Twitter.

And again, we have have a problem with the use of images, unless the terrorists really are using a third party client. Maybe this time it’s Twittelator.

Scenario 3 is actually somewhat plausible — and the report actually has some examples of tweets apparently from soldiers in Iraq and Afghanistan. Most seem to be from off-duty time, but it’s certainly not impossible that a solider could give away valuable information like location to a massive amount of people on Twitter. However, I find it hard to believe the Army has no problem with its soldiers using Twitter during an operation. Maybe they don’t know about it, and from the way the report spells “My Space” and “Face Book,” that could very well be the case.

Now I’m not saying terrorists use of web technology isn’t a potential risk — of course it is — but using Twitter in the way described above would seem problematic for terrorists at best. And more likely would be downright annoying. Imagine if a terrorists on a mission didn’t have his text message alerts set up when someone direct messages him or her. They’d have to sign in to Twitter and look at their replies manually. Anyone who has used Twitter’s native mobile site will know what a pain that is.

Twitter has also become a social activism tool for socialists, human rights groups, communists, vegetarians, anarchists, religious communities, atheists, political enthusiasts, hacktivists and others to communicate with each other and to send messages to broader audiences.

Oh no, not vegetarians!

I do think it may be smart for the government to watch public Twitter streams to look for talk about potential terrorist activity (which people undoubtedly won’t like to hear), but for actual terrorist operations, I’d stick to field work for now.