Add web browers to the list of things Google does well. The Mountain View-based search giant debuted its new web browser today in a public beta, and I’ve spent most of the afternoon poking around the web and seeing how Chrome performs. The verdict? While it’s still a few iterations from displacing Firefox as my browser of choice, Chrome already provides a much more pleasant web experience than Microsoft’s newest competitor Internet Explorer 8 (also in beta). 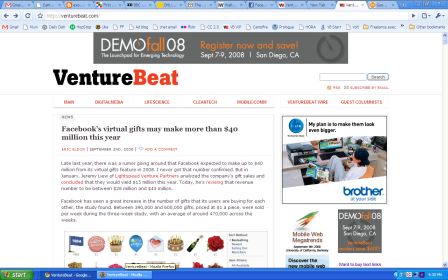 The first thing that pops out is the screen size. Because Chrome gets rid of menus and melds the search bar and URL bar into one “Omnibar,” the browser feels like its always running in full-screen mode. For browsing, this means about an extra half-inch of web pages is viewable. That may not seem like much, but it makes a huge difference, particularly when, like me, you spend a great deal of your day reading from web pages.

The decision to put tabs at the top of the page also reduces clutter. Even better is that tabs are grouped together. If I click a link from one page, the resulting page will show up in tab appearing directly next to the tab I’m using, and not at the end of the line. In practice, this means that my tabs stay relevant to the ones near by them, which is helpful considering by the end of the day I can have twenty open tabs to sort through.

It’s also fast — or least is fast in certain things. In loading some web pages, I noticed that Chrome seemed a bit pokier than Firefox, like Walt Mossberg notes. But when using web apps like Gmail or Facebook, Chrome was noticeably faster. Google Reader in particular seemed to be much more responsive, without the half-second lag I experienced in Firefox.

Also useful is Incognito, a feature that allows you to surf through web pages without dirtying up your search or browser history. You also have the option to right-click while surfing in regular mode, and open a link into Incognito mode. 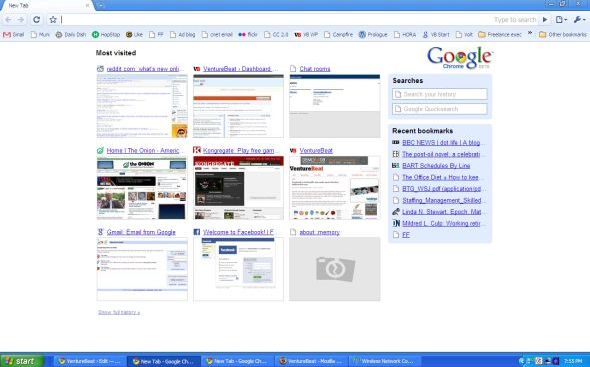 Finally, Chrome’s homepage is one of those feature that once you’ve used it, you’ll wonder why every other browser doesn’t do the same thing. The homepage provides a look at your most visited web pages, which becomes immediately useful after a few hours of use: By showing me quickly where I tend to go on the web, Chrome cuts down the time I spend sifting through bookmarks or typing in URLs, and does it in a way that feels utterly intuitive.

The browser never crashed on me, but it did seem to have a few hiccups when dealing with Flash apps. A Flash game at popular portal Kongregate hung up on me, and videos at Funny or Die seemed choppier than in Firefox. And Chrome’s claim to fame — that if one tab suddenly starts going haywire, the rest of them are fine — didn’t seem to work in reality for me. When one Chrome tab would freeze while running a Flash app, every other tab would become unresponsive as well.

The lack of Firefox add-ons is also sorely noticeable. Without the Greasemonkey scripts I’ve come to rely on, something felt wrong. It felt like when I try to use a Mac (I’m a PC owner), and keep trying to use the non-existent right click button. Chrome doesn’t currently allow for browser extensions, which curtails how useful it can be — although that functionality is coming. Chrome is also currently only available for Windows, and Google isn’t saying exactly when Mac and Linux ports will be coming.

While Google’s new V8 Javascript engine did seem to speed up many applications, at least according to one Java speed test, Firefox is still a bit fleeter, and Safari is the fastest of all. IE 8 was the slowest of the pack, however, nearly two and a half times slower than Safari.

These quibbles are more a result of Chrome still being in beta, and not an indictment of the browser itself. While Chrome as it currently exists won’t replace Firefox as my daily browser, it comes very close to knocking Mozilla off that perch. Once the open-source community begins to develop for it, and a few of the kinks have been ironed out, I think Google will give Mozilla a serious run for its money.

The spare and elegant design aesthetic of most Google products carries through here beautifully in Chrome, and stands in stark contract to the feature bloat that IE suffers. Mozilla should be worried, but Microsoft should be absolutely terrified.

Chrome’s claim to run Javascript faster than rivals will no doubt get a lot of third parties examining and experimenting with its open source code. Any web developer will likely be affected. Chrome also lets you see differences in load times between sites (not possible in other browsers), which will make web sites accountable for their own page load times. 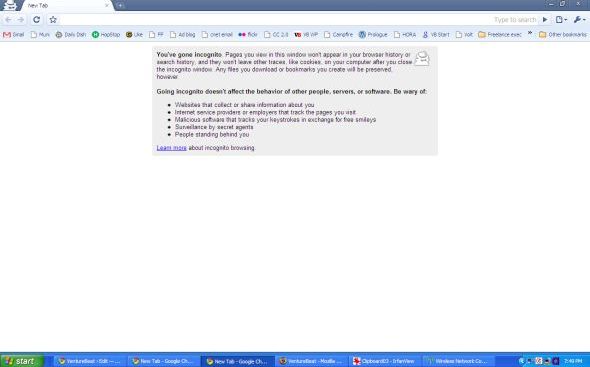 As developer Chris Messina summed up:

Start poking around the names [of leading browser engineers] in the Google Chrome comic book and the names are there. Scott McCloud’s drawings aren’t just a useful pictorial explanation of what to expect in Chrome; it’s practically a declaration of independence from the yesteryear traditions of browser design of the past 10 years, going all the way back to Netscape’s heyday when the notion of the web was a vast collection of interlinked documents. With Chrome, the web starts to look more like a nodal grid of documents, with cloud applications running on momentary instances, being run directly and indirectly by people and their agents. This is the browser caught up.”

It’s worth noting that a large portion of web users everywhere are still on earlier versions of IE, 25 percent may still be using IE6, first released in 2001. That is partially because these versions have been installed at businesses and other organizations over the years. Because business users have other sets of concerns to worry about, such as compatibility with internal software or security updates, this stat can appear exaggerated.

People who learn about new browsers will eventually upgrade if they have a choice. Chrome, while still in beta, sets itself apart by doing a better job of serving applications, not just pages. As it continues to improve — and as web applications become increasingly common for all users — it will set the standard for web browsing of the future.