Outside.in, a site for community news and discussion, has raised an additional $3 million and appointed a new chief executive.

The Brooklyn, New York startup named Mark Josephson, former president of marketing company Seevast Corp., as its new CEO. Josephson doesn’t appear to have experience in local news or local content, but that may not be a problem, since sites like Outside.in are still experimenting to find the best approach. His most relevant experience may be his time as general manager of the New York Times-owned advice and information site About.com. 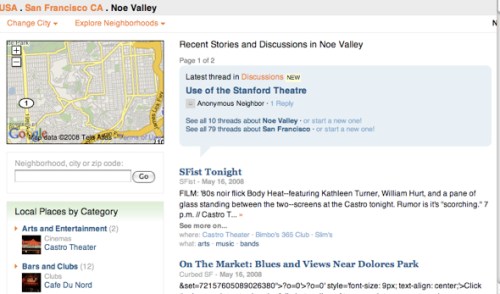 There have been some notable failures among companies trying to create local news hubs, including Judy’s Book and BackFence. But co-founder John Geraci has said those sites launched too early. There’s definitely a good opportunity for sites that take advantage of people’s interest in local news, the one kind of news that’s pretty much guaranteed to be relevant (not to mention a great opportunity for targeted advertising). When Outside.in launched more than a year ago, we thought it was was a strong contender, and in March it announced an even smarter approach — a personal portal called Radar, which sorts content based on its relevance and distance to the user. (Without Radar, Outside.in is divided into mini-sites, sorting news and posts by city and neighborhood, which is a less fine-tuned approach.)

The company declined to provide a specific traffic numbers to give us a sense of its traction, but it did say the service now covers 11,680 neighborhoods.