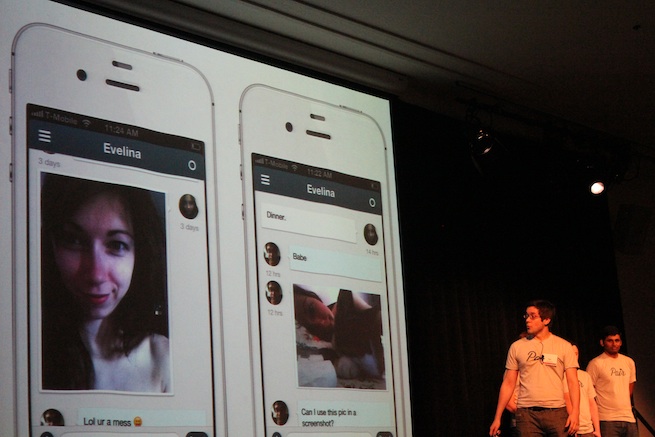 If your friends are sick of seeing lovey-dovey status updates meant only for your significant other, it might be time to take your love to a new private social network.

Pair is an iOS app for couples to share pictures, messages, video, sketches, and locations with each other. No one else can see the content and you’re friends won’t roll their eyes when they read an “I love you” tweet anymore. You can also share more, ahem, private pictures without the fear of others looking at them.

One of Pair’s features is the “thumbkiss,” which lets couples “kiss” with their fingers by touching the screen in the exact same place. If you both tap the same spot on the screen, your phone will vibrate. Adorable? Maybe. Hilarious? Absolutely.

The app launched last Friday and according to founder Jamie Murai, Pair has sent one million messages and has more than 50,000 registered users in just four days.

Pair is getting funding from Dave Morin (founder of private social network Path) and SV Angel. Onstage at Y Combinator’s Demo Day, Murai said that Morin was quite smitten with the app.

Pair is cute, but it’s not the first of its kind. Korean-based Between is an Android and iOS app exclusively for couples. Ourspot is a web-based private social network for couples or best friends.

Pair is one of 39 companies presenting at Y Combinator’s Demo Day Spring 2012 event. Check out other cool companies making their debut here.