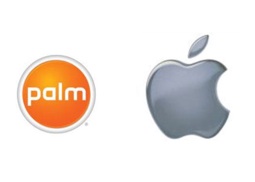 When mentioning that it would go after anyone ripping off its IP during its earnings call this week, Apple wouldn’t specifically name a company that warning was directed at. But if you want to know, look no further than the company commenting on that statement. “Apple was not the first to do multi-touch,” Palm spokeswoman Lynn Fox told Reuters yesterday.

Truth is, just about everyone realized right away that the comments made on the call by Apple’s acting leader Tim Cook (with Steve Jobs on medical leave) were aimed squarely at Palm. The former PDA maker turned cellphone maker, which has been struggling mightily in recent years with the rise of sexier smartphones like Apple’s iPhone, came out guns blazing at CES when it introduced the Pre, its sleek, completely revamped device. Part of that revamping included adding multi-touch technology to the display, something no company besides Apple has done before in a phone (see the above comment).

It’s not entirely clear what specific IP Apple thinks Palm might be infringing on, but given the comments and the device itself, it’s a safe bet that it is something having to do with the multi-touch screen and its gesture-based interaction. Both companies have large patent portfolios (some of Apple’s and some of Palm’s), and Palm clearly thinks it has the right ones to be able to do the Pre.

“Palm has a long history of innovation that’s reflected in our products and robust patent portfolio, and we have long been recognized for our fundamental patents in the mobile space,” Fox told Digital Daily.

To make matters more interesting, Palm now has several former Apple executives working for it, and yes, they specifically helped build the Pre. This includes Jon Rubenstein, who ran Apple’s iPod division from 2004 to 2006 and is now Palm’s executive chairman.

These are just the opening moves of a dance that may eventually turn into an elaborate courtroom tango. If it gets too ugly, maybe Apple should just consider buying Palm (something we’ve said before). After all, it now has some $28 billion in cash on hand just burning a hole in its pocket. And Palm, even after its recent surge in stock price following the Pre announcement, has a market cap of just $827 million.

Oh, and one more thing: Lynn Fox, the Palm spokesperson who I’ve quoted twice in this story — she was formerly a spokesperson for Apple before taking the same role for Palm.