Path, the private social network that has been trying to figure out what it wants to be when it grows up, is now trying out several new directions.

It is dropping its characteristic limit on friends, splitting off its messaging into a separate app, and incorporating a business texting service it just bought.

A limit of 50 friends had initially been one of its guiding principles, as it billed itself as a private social network designed for quality connections. That limit had been raised to 150, but now the cap has been entirely removed. A key danger is that this could damage a central theme in the company’s identity. Meanwhile, the main Path app has been redesigned to simplify sharing and navigation.

Path’s most popular feature, messaging, is now getting its own run as a separate app called Talk.

“Our goal,” the company said today on its blog, “is to make a more personal messaging experience.” Because “real life conversations aren’t recorded permanently,” messages vanish after 24 hours.

Ambient Status is a new feature in Talk that keeps your friends aware of what you’re doing – assuming you opt-in. It can detect motion to infer and report that you’re in transit, report if you’re low on battery, or even mention what song you’re listening to. The Quick Replies feature uses swipes to acknowledge a message, ping someone, or start a call. 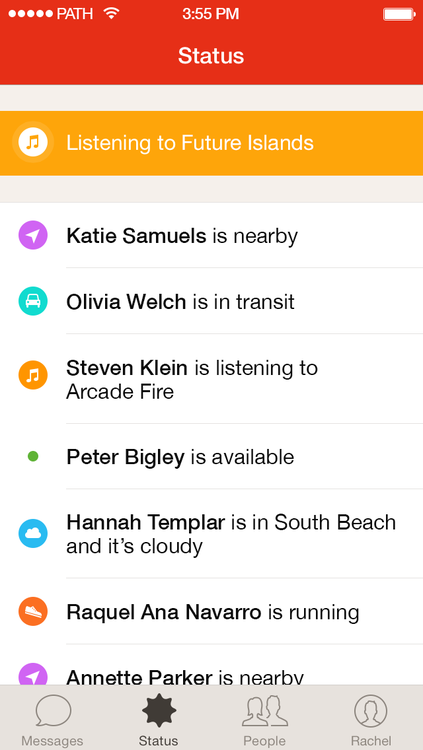 The company also announced today it has acquired Boston-based TalkTo, a place messenger that allows a user to text a business and get back a text within minutes. It cuts out all that phone calling that is still commonly used to make appointments or see if a store has a certain product. The acquisition price was not made public.

Is TalkTo a preview of the day when artificial intelligence-driven communication is common in every business? Not quite. It uses a service team of TalkTo Agents who make the phone call for you and then text you back. Alternatively, businesses can email or text their responses themselves.

A question here is whether this text-oriented feature is more trouble than it’s worth for some kinds of inquiries. Phone calling a business can sometimes still be the most efficient way to ask a series of questions.

TalkTo will be integrated this summer into Talk as a feature called Place Messaging, after which TalkTo will be shut down as a separate app.

In a post today, Co-Founder and CEO Dave Morin wrote that the separate Talk app is now “much easier to access than being buried in a tab in our main app, [and] Business Messaging is the core differentiator we are focused on for new users.”

The company, which was born with more than its share of hype and currently reports over four million daily active users, has hit a few speedbumps in its path.

Early last year, for instance, it received a fine of $800,000 from the Federal Trade Commission when it was discovered to be harvesting user information from address books without the user’s permission.

Last fall, it laid off 20 percent of its staff.

In January, it raised $25 million in a third level of funding from a group led by the Bakrie Global Group, in Indonesia. Path reportedly has a big following in Asia.