The battle for your livestreamed content continues to rage on, with Twitter introducing a new capability for Periscope. Rolling out today is a service called Periscope Producer, which lets brands, media organizations, and other creators broadcast professionally produced, high-quality live video made through external cameras, an Xbox One, virtual reality headsets, a computer or web cam, and other devices.

Today’s announcement is the culmination of an experiment run by Twitter over the past six weeks. With Periscope Producer, creators will stream their broadcasts normally, but with one exception — if using the iOS app, there’ll be an “advance settings” option, which can be toggled. From there, an unlimited number of arbitrary sources can be added, meaning that you can connect with nearly any third-party device that has a video output, using a stream key. The broadcasts are then shared to Periscope and, if desired, Twitter. 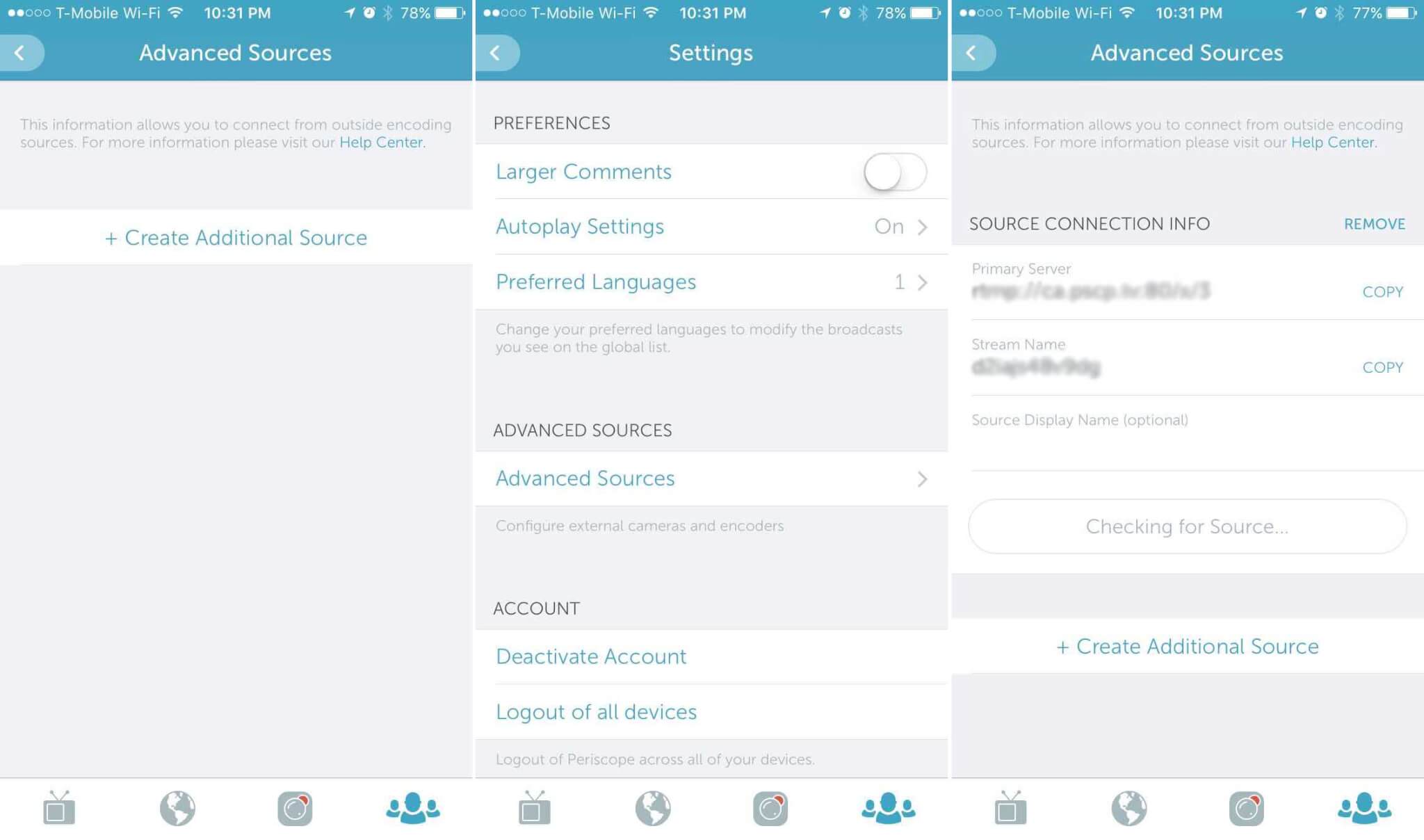 Above: Settings within Periscope’s iOS app to connect with external broadcast sources.

“We’re taking a big step today and have been working on this for a while to allow the breadth of content that goes into the Periscope ecosystem, and vicariously, the Twitter ecosystem, to not just be limited to content that is captured from mobile devices, but any type of live broadcast,” said Kayvon Beykpour, Periscope’s chief executive.

He highlighted some examples, showing a group of reporters how Xbox One games can be streamed through Periscope, or how virtual reality experiences can even be had, such as exploring what it’s like on Mount Everest.

“We wanted to enable the framework and groundwork to let people do the things we wouldn’t have the creative chops to explore,” Beykpour said. He reiterated how significant a development Periscope Producer is, highlighting the shift from devices with rear- and front-facing cameras to ones that are premium. “It extends the boundary of what you can do with a live medium,” he proclaimed.

The default Periscope experience will suit the majority of users, but for brands, media organizations, and video creators who have a fan base, Producer might be a worthwhile reason to divert resources and attention away from YouTube and Facebook. Based on its strategy around live events, Twitter definitely needs this to work, and the feature should be appealing to professionals who care about the quality of their broadcast.

“Periscope allows anyone to watch something with an audience, and now they’re able to watch daily shows, large and small-scale events, and other live video with compelling content from creators they know and love,” Beykpour said. “High-quality, produced live video can now be shared anywhere through a Tweet.”

The service is only the latest in a string of updates that Twitter has released for broadcasters this year. Last month, it introduced its VIP program for frequent broadcasters, while also revealing that it would soon allow creators to monetize their work with pre-roll ads.

But there’s one more thing: Beykpour announced that Periscope supports Apple’s ReplayKit, which is available only in iOS 10 and allows livestreaming from apps for gameplay. What this means is that in addition to enabled apps now being able to stream through Periscope, developers can leverage different capabilities in the live video app. For example, the front-facing camera could be enabled when playing a game so viewers could see a player’s reaction or expose the chat room to manipulation.

Periscope Producer is currently rolling out, but if you’d like to get an invite to try it now, go to t.co/periscopeproducer and submit your application. The source workflow portion is only available for iOS devices, but an Android version is in the works. There may be a time when this becomes more widely available to the general public, but Twitter is being intentionally careful, as it doesn’t yet know how well its servers will be able to handle the load.