Phile is launching a public beta today for its web-based tool that lets anyone create a special interest group on the web. The tool is automated and thus is a lot easier and cheaper than creating a custom web site.

You can start a group with a single click. You give it a name and can see right off the bat that it has different interest sections for members, forums, FAQs, and the Home Page. You can add information that appears in the general news feed, but you can also customize entries by adding maps, logos, and information fields. Within a matter of minutes, you can create a site that can be shared with anyone. In the video below, company cofounder Sho Kuwamoto shows how he can create a group for brewery fans, complete with maps, addresses, ratings and other info related to regional beer breweries. 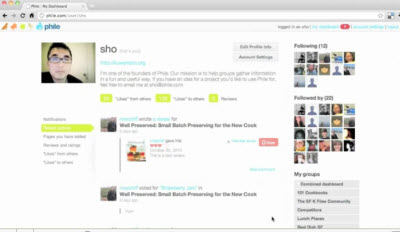 As a creator of mini social networks and forums, San Francisco-based Phile competes nominally with rivals such as Yahoo Groups or Ning social networks. But Kuwamoto says the service is probably closer to tools for creating wikis, or listings of information that have a permanence to them. Kuwamoto says that Phile is designed to capture details about a topic and permanently store them as a resource for people to visit over and over again. He also said the service has more structure and organization than wikis. It’s kind of like a more visual version of the Yelp review web site.

Over time, Phile is looking at several ways to make money. It could run ads on the sites, which would likely generate a lot of web traffic. The company could also help with the creation of custom domains or charge fees for certain storage amounts. It could also make money through affiliate marketing deals.

Other services that conceivably compete with Phile are Quora, ePinions and Wikia.

Phile was started last year by Kuwamoto and co-founder Mike Schiff. Both of them have experience creating cool products. Kuwamoto was an engineer at General Magic and was one of the creators of web developer tool Dreamweaver at Macromedia. Schiff was an engineer at Ingenio and was a member of the Flex team at Adobe. They are both running the company and have a bunch of contractors working for them.

The founders say they value their independence and have self-funded it to date, although they didn’t disclose the amount. The company was founded in 2009.