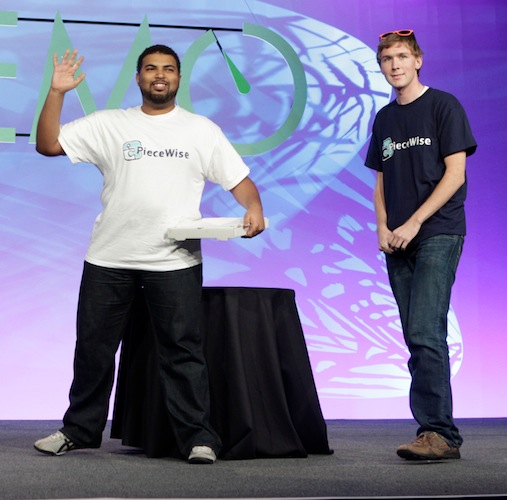 Doling out work to different outsiders is never fun. But PieceWise hopes to make it easier by focusing on how to outsource pieces of projects to different people.

Cambridge, Mass.-based PieceWise lets you create a public or private plan for a project. As you do so, PieceWise makes suggestions to you about how to fill out the details in your plan, based on other public projects. Anyone can contribute to your public project by making suggestions on the steps it takes to finish and voting on each step’s usefulness. Then others can bid to complete the steps for you. PieceWise is unveiling itself today at the DEMO conference in Santa Clara, Calif.

The team showcased the app with the example of making pizza, a clever choice in a time slot right before lunch. Sure there is the delivery option, but with PieceWise, a group of hungry young entrepreneurs (or anyone) could draw from multiple sources to have fresh, piping hot, homemade pie, without expending any effort.

“We solve the problem of never having enough time to get all the things done that we want to do,” said William Neely, chief executive of the company. “We decided to focus on this because, like all entrepreneurs, we have lots of ideas and projects that we want to see get done but never have enough time to do them all ourselves.”

Once the project plan is complete, you can manage the project by assigning tasks to users, setting up text and email reminders, and marking pieces as complete when they are finished. You can accept offers from would-be workers.

“This means that you could take an idea, get a plan for how to turn that idea into a reality, and know exactly how much it would cost with almost no time investment on your part,” Neely said.

The company hopes to tackle the problem of wasting time trying to find solutions that other have already solved many times over. Companies don’t have to keep reinventing the wheel.

“Imagine a world where all you have to do to turn an idea into a reality is push a button,” Neely said. “That’s the world we want to create. You can think of us as the assembly line for everything because PieceWise reduces projects to a set of reusable pieces that are easy to outsource or do ourselves. We all know the changes assembly lines brought to manufacturing, imagine that for the rest of the world.”

PieceWise has received $70,000 in funding since it was started in 2011. The money came from Howard and Kitty Van Bortel. Now the company is working on raising a seed round. Within the next six months, the company wants to grow to more than 100 public projects, thousands of daily users, and an overall user base of 10,000. It will also work on a more sophisticated version of its marketplace to handle transactions. Rivals include Amazon’s Mechanical Turk and eLance. Neely said his site helps its users merge different pieces into a useful whole.

However, participants on the social sage panel Jason Mendelson, Tracey Isacke, and Josh Elman expressed concern over whether the company could reach that critical mass, where there are enough projects and people in the database to make it a genuinely useful service.

The company hopes its advantage lies in reuse of pieces of projects. And it will help companies and individuals come up with more accurate estimates of how much time, money, and effort a project will take to complete. Overall, PieceWise is a platform that merges an online marketplace, project management tools, and crowdsourced project planning.

This infographic from the company breaks down the PieceWise process…piece by piece. 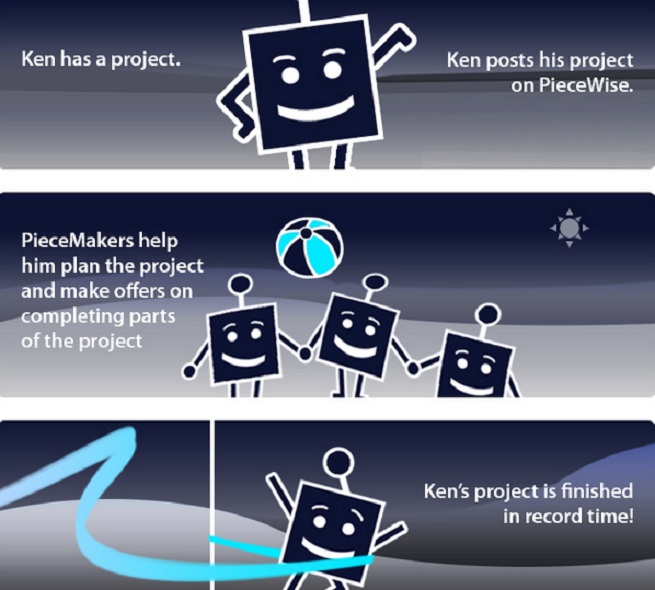 PieceWise is one of 75 companies chosen by VentureBeat to launch at the DEMO Fall 2012 event taking place this week in Silicon Valley. After we make our selections, the chosen companies pay a fee to present. Our coverage of them remains objective.