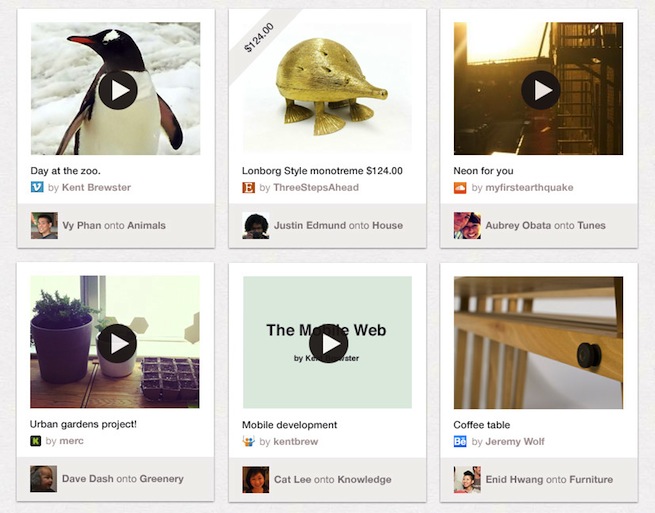 Pinterest is making content creators of the Internet happier today, by providing more attribution tools for sites such as Etsy, 500px, Kickstarter, Slideshare, and SoundCloud.

Pinterest allows you to take images, videos, and other content from around the web and “pin” them to a topic-specific board. For instance, you can create a fashion-oriented board and pin images of dresses taken from Nordstrom’s website. The service has become a household name, earning the company a $100 million second round of funding, reportedly valuing the company at $1.5 billion dollars.

But content creators weren’t as smitten with the site when millions of people started pulling their images without any attribution. Photo-sharing site Flickr even banned pinning images from its site when Pinterest released a “do not pin” code for those who felt their copyrights were infringed. Soon after, Pinterest introduced a new attribution feature, which embeds a small icon of the pin’s source and a link back to keep brands happy. And it worked.

The attribution, announced in May, rolled out to YouTube, Behance, Vimeo, as well as Flickr, which then opened access to pinning back up. Indeed, the company even added a Pinterest button to its site. Today, Pinterest is trying to sweeten its relationship with these five new companies, which are guaranteed attribution from the tool.

SoundCloud, which lets you upload any kinds of sounds and share them, said that it is “unmuting” Pinterest because of today’s announcement, and will now allow you to listen to SoundCloud music on the social network. When you open a SoundCloud pin on Pinterest, the HTML5 widget will load and let you listen in. Videos from Kickstarter, and slide shows from Slideshare are also now available to be viewed from your board.

More companies are expected to receive the special attribution treatment as the company asks users to “stay tuned.”