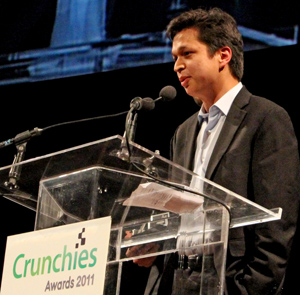 Hot-as-heck social networking service Pinterest won the award for Best New Startup of 2011 at the Crunchies Awards last night, beating out other strong contenders like Turntable.fm, Fab, and Codeacademy.

Pinterest lets people spotlight products and pictures they like and was launched in private beta in March 2010. It was nominated in the 2011 category because it saw incredible growth in traffic last year. The site attracted nearly 11 million unique visitors in mid-December and is now one of the top 10 social networking sites on the web.

On top of that, a study by Shareaholic came out yesterday that indicates Pinterest is driving massive amounts of referral traffic to other sites as well. According to the study’s findings, which are based on data from more than 200,000 publishers, Pinterest now drives more referral traffic than Reddit, Google+, LinkedIn and YouTube. Pretty compelling stuff, if you ask us.

Asked why Pinterest remained under-the-radar for so long, co-founder Ben Silbermann (pictured) told TechCrunch: “The whole team really just wanted to build a product that we really loved and that we hoped other people would really love. That’s pretty much what we do.”

Silbermann also elaborated on what elements could be driving so much growth to his site: “Pinterest is a visual site, and a lot of people are visual by nature,” Silbermann said. “But at its core, Pinterest is a site that connects people who are passionate about the same things. In the same way that people who use Facebook are excited to connect with people they care about, people on Pinterest are excited to be inspired by people with similar tastes.”

As expected, Silbermann would not disclose how many members or “pins” the site had accumulated thus far.

You can view a screen grab from Pinterest’s home page today below: