Pinterest has begun rolling out a way to highlight local and trending ideas from across its site. Every day, the company’s editors, along with local brands, celebrities, and influencers, will curate popular pins, users, boards, and searches within Featured Collections. This dedicated space is available to users in the U.K., France, Germany, Brazil, and Japan to start with and can be accessed on Android and on the Web. 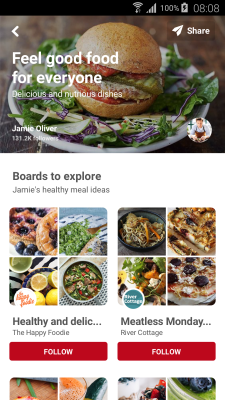 Featured Collections is another way for users to discover great ideas in their native language, and it is designed to not only improve engagement, but to give new users more information on how to use Pinterest. The company claims that in early tests, this offering resulted in users finding and following more relevant boards. A spokesperson shared that Featured Collections makes it easy to browse pins and “serves as another channel to discover content,” in addition to search, recommendation, and more.

Local Pinterest community teams will rely on trending data to select what will be featured in these spaces. They’ll look at ideas posted by brands, celebrities, and Pinners who have “quality content” that represents popular topics within local areas.

Appealing to localized audiences is important because Pinterest is seeing substantial growth in its international markets. The company revealed that most of its users are based outside of the U.S. In fact, it believes that the next 100 million Pinners will be international. Although Pinterest declined to provide more specific information, it said that in the last year, user growth in Germany “nearly tripled,” while engagement in France, Brazil, and Japan “doubled.”

“We’re also seeing significant growth in markets like Russia, South Korea, and Mexico,” the company stated. Of course, these happen to the markets where Pinterest has spent resources on growth recently, including establishing local offices and community teams.

The growth numbers come just weeks after the company overhauled its iOS app to focus on a more personalized, clean, and fast experience. The announcement indicates Pinterest’s recognition that one service isn’t going to suit all markets and that localization is going to be increasingly important as it moves forward.