Pinterest is bringing its Buyable Pins to Android devices, nearly five months after these ecommerce tools became available in Pinterest’s iOS app. Now that these highly touted Buyable Pins are available across both major mobile operating systems, the company has decided to launch a new store called The Pinterest Shop, which provides a hand-curated catalog of items you can buy right from Pinterest. 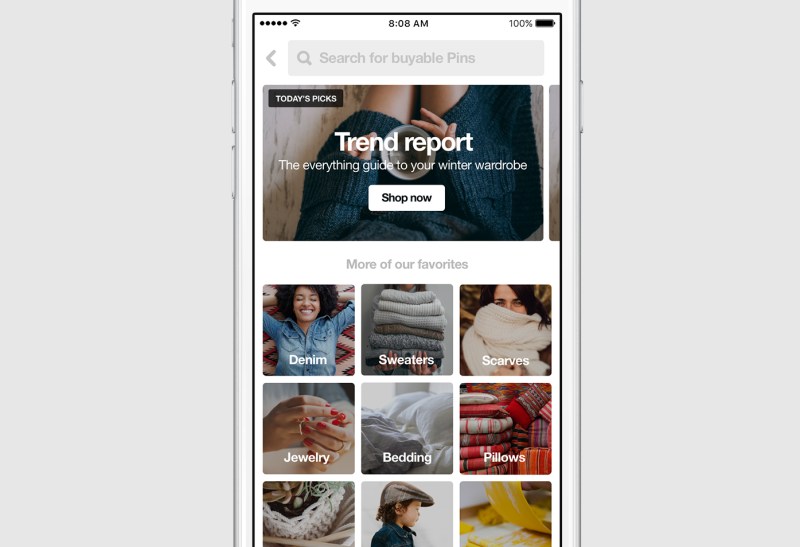 Since the feature’s launch, more than 60 million Buyable Pins have been created by merchants, which Pinterest said is a positive sign of its adoption. Not only that, but three major ecommerce platforms have integrated with the visual discovery search engine: IBM Commerce, Magento, and Bigcommerce. “Merchants are experiencing improved mobile conversion rates, new customers, and incremental sales at no extra cost to the merchant,” the company told VentureBeat in an email.

While there’s certainly no shortage of Buyable Pins, finding the ones you want can be a daunting task. That’s why Pinterest has cataloged them into a new destination available through its mobile apps. Users can access The Pinterest Shop by clicking on the explore/search icon and scrolling to the Shop category. All of the company’s retail partners can have their Buyable Pins included in this section, with no fee for being featured.

Merchants featured in The Pinterest Shop will be rotated out throughout the week in order to provide users with a fresh set of products and ideas. A company spokesperson explained it this way: “In the Pinterest Shop, you’ll find merchants like Neiman Marcus, Nordstrom, Madesmith, and Ethan Allen in ‘Our Favorites’ shops and hundreds of Pins from hundreds of merchants in ‘Today’s Picks’ and ‘More of our favorites.'”

Now that Buyable Pins are available for iOS and Android, the only thing that’s missing is to implement them on the Web — and Pinterest said that’s coming.