Pinterest formally added support for Twitter Cards within the last week, VentureBeat has confirmed. The release went live as a limited test early last week and received little fanfare until the Twitter-embedded pins were spotted by Pinterest aficionado Kelly Lieberman and the story was picked up by the Daily Dot. 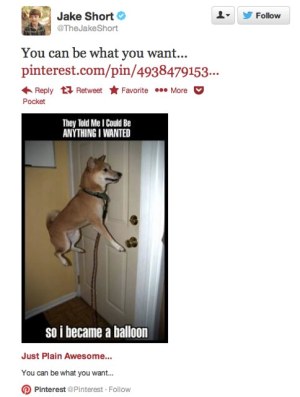 The Pinterest-Twitter mashup means that whenever you post one of your inspirational pins to Twitter, the contents of said pin will appear inside your tweet. With pins inside tweets, people can see a preview of your fashion finds or holiday recipes without having to click through to Pinterest.

The integration leverages Twitter Cards, also known as expanded tweets. The functionality allows third-party partners to put their photos, news, videos, songs, and so forth, inside your tweets for immediate enjoyment.

Twitter has an arsenal of partners pumping content into your tweets, but Instagram is not one of them. The Facebook-owned property unceremoniously dropped support for Twitter Cards last week, citing a desire to drive people to its website for a better experience.

Is it just a coincidence that Pinterest pins have arrived inside tweets as Instagram photos have exited from them? Yes and no. Twitter and Pinterest certainly worked together on the integration, but that may be only because of how Twitter Cards is currently structured. Companies interested in employing Cards go through a formal approval process that requires Twitter to review the implementation before it goes live. Pinterest, however, may have chosen to speed up the implementation process and expand the test after the Instagram dustup.

Regardless, the Pinterest addition is good for Twitter. The more top-tier partners Twitter can get to use Cards, the better its chances are of keeping its members engaged on site or inside the mobile apps longer. Perhaps people may also start to forget what they’re missing.

Update: A Pinterest spokesperson said Thursday, December 13 that the company has ended its test of Twitter Cards. “We have now completed the test and are turning off the integration while we evaluate the results.”