But until now there hasn’t been a single unified way to monitor, measure, and analyze your influence across all three. “Until now” are the key words in that sentence.

“We are the complete marketing suite for visual interest-based social networks,” Piqora CEO Sharad Verma told me yesterday. “We’re the only company that provides a unified dashboard for Pinterest, Instagram, and Tumblr.” 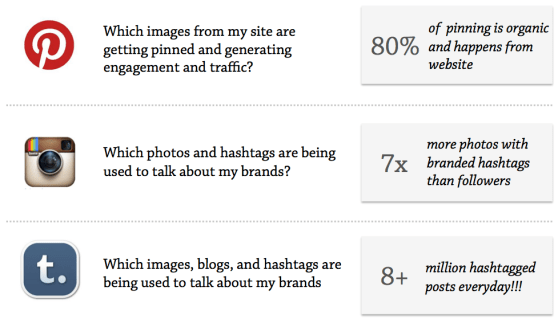 Four months ago Piqora was Pinfluencer, the visual analytics company for Pinterest. In March this year it rebranded to Piquora — and now we know why. Today, the company, which already counts brands such as Zappos and Sephora among its clients, has expanded beyond Pinterest for the first time and included all of what Verma refers to as “visual interest-based social networks.” 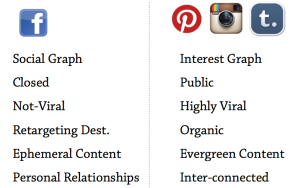 Pinterest, Instagram, and Tumblr are each highly visual. Images are core to Pinterest, as photography is to Instagram, but reblogged images are also hugely important in Tumblr. Ninety-one percent of the posts on the recently-bought-by-Yahoo blogging-based social network — yes, Tumblr has significant social network characteristics — are reblogged, and are highly visual.

But the three services are all also open, highly viral, and organic social spaces with significant differences from Facebook, which is designed around a mostly-closed social graph.

“Facebook is a closed network which limits virality,” Verma explains. “But visual interest-based networks are public, which leads to a very high degree of virality, high amplification, and bigger reach.”

They’re also highly interconnected, Verma says, with 11 percent of the pins on Pinterest coming directly from Tumblr. And the product-related conversations on Pinterest, Instagram, and Tumblr are mostly organic — not driven by brands but emerging from people. Most importantly, perhaps, they are interest-based social networks, meaning that unlike Facebook, which is mainly driven by past-focused social sharing (I did this, I was here), these three networks often highlight the holy grail of all online marketers that Google has captured so well: intent data.

All of those spell opportunity for marketers.

“We allow brands to track any hashtag, any campaign, or any lifestyle tag across all three networks,” Verma told me. “Hashtags are really the key to brand discoverability, to track what’s trending. And we allow marketers to drill down to their influencers and contributors who are already talking about them.”

For example, if the maker of Oreos wants to know how people are eating the cookies, what they’re pairing the sweet snacks with, or how the latest “you can still dunk in the dark” campaign is going, brand strategists can search on keywords or hashtags across Pinterest, Instagram, and Tumblr simultaneously. And Piqora goes beyond words, as its visual engine picks up brands’ images so it can highlight content and sharing that would go unnoticed by a simply text-based social media management tool.

“Using the new analytics you can enter any hashtag you want and see photos, contributors, and posts in real-time across Pinterst, Instagram and Tumblr,” Verma says. “You can also easily plug in your Instagram profile and get profile analytics, such as most engaged followers. … Most visual networks are a black box with no APIs available, so this gives you insight you wouldn’t have before.”

That’s an important point, because although Pinterest has some level of built-in analytics, as does Tumblr, Instagram has no real tools for marketers to measure their success and engagement beyond what every participant in the social network has.

“We’re chomping at the bit,” Verma says. “Tumblr has opened up ads, and as soon as they have an API, we’ll be there. The same goes for Pinterest and Instagram — we could become the native ads DSP [demand-side platform] and allow brands to do coordinated visual media buys across Instagram, Pinterest, Tumblr.”

Now that would be interesting indeed.