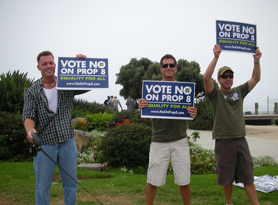 Maybe you’re aware that tomorrow is Election Day in the United States. Obviously, it’s a pretty big deal because we’ll be electing a new president, but there are several other key battles going on — both in contests for other offices and in proposition voting. With the explosion of online advertising over the past several years, web sites that use keyword-based advertising, such as Google’s AdSense, are now getting bombarded with political ads, whether they want them or not.

A great example is advertising about Proposition 8 in California. The measure, which seeks to ban same-sex marriages (which are currently legal in California), is a very hot-button topic this year. As such, many sites are now being bombarded with keyword-based advertising about the measure — even if the position being advertised is not aligned with the views of the site owner.

Blogger Scott Beale saw this first hand today when his Laughing Squid blog became a canvas for “Yes on Prop. 8” ads. He is not happy about it. As he writes today:

The sneaky bastards from “Yes on 8” are buying “No on 8” AdWords on Laughing Squid. I’ve added them to our ad filter and I’m removing Google AdSense from Laughing Squid until after the election.

And yes I know this is how AdWords works, regardless get the hell off of my blog.

At least in Laughing Squid’s case, the ads were served because of a post Beale did about Prop. 8, which would take away gay couples’ right to marry. But I’m actually seeing the same “Yes on Prop. 8” ad on my personal site even though I’ve never written about the topic — in fact, I have two of them currently being served! Of course, I have written some posts about politics in the past few months, so I’m sure that’s why I’m getting them. But I, like Beale, do not want someone advertising on my site with a message I don’t support. I don’t think anyone would. 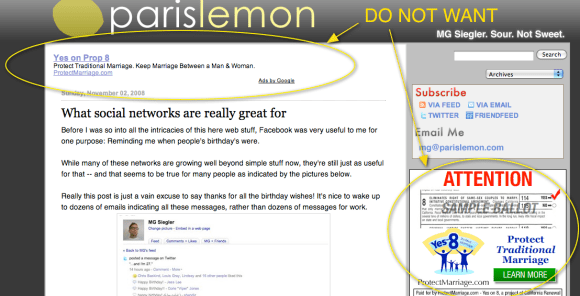 This also happened to me last month when McCain/Palin ads started showing up despite my clear preference for Barack Obama. Likewise, during the primaries, I was getting Hillary Clinton ads on my site despite my Obama support.

As Beale notes, you can use Google’s ad filter to get rid of these (as I have in the past), but most site owners are not going to do that. And so, sneaky advertisers get their messages on sites that are against the things they are saying.

Here’s hoping that in the next round of elections, Google will make it easier to completely filter out political ads. I know that I, and I suspect my readers, would prefer to see none of them — regardless of what side you’re on. I’m sure Google has pulled in quite a bit of money from campaigns and interest groups, but an easy opt-out would be the right thing to do.

My political beliefs are my own, and not representative of VentureBeat. But again, I think people with opposite views would not appreciate this happening on their sites either.