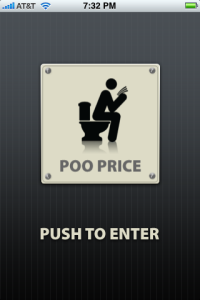 This week, Apple eased up on some of its rules for iPhone App Store. Whereas before it seemed a bit prude in rejecting games with racier content matter, after a week that saw both an NC-17 game released and not one, but two games that simply make farting sounds, Apple seems to be asking for all things crude. As the saying goes: Be careful what you ask for.

New in the App Store today we have Poo Price. The application is very simple: It counts time while you’re doing your business on the toilet at work — and tells you how much money you made during that time “working” based on your salary.

Humourous? Sure, kind of. Crude? For sure. Interesting? Yes — here’s why: Developer Gourmet Pixel say that Poo Price “works in the background” on the iPhone. Yes, you read that right. You open the app, start the timer, exit the app, do something else on the iPhone, come back to the app, and it’s still keeping time!

I’m not entirely sure how Poo Price is doing this — or if this is really an example of an app running in the background. I would guess that it’s using the iPhone’s internal clock, and perhaps it saves the time when you leave the app then remembers it for when you come back. I know several other apps allow you to pause an app on exit and remember where you were, so I think this is just syncing that with the iPhone’s internal clock.

Still, it’s kind of interesting, I haven’t seen any other app that does this so far. If it actually is running in the backround, and it somehow snuck this by Apple’s backed up app approval process, expect it to be removed from the App Store soon. But, as I said, I would guess that’s not the case.

Instead, this is probably just another crude app in the new, racy App Store.