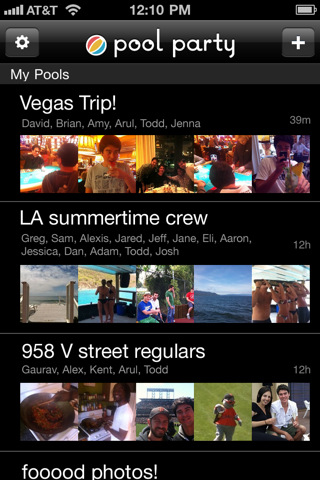 Google has spent most of the week talking up its new social service Google+, which aims to revolutionize the way people communicate online, including how they share photos. However, that isn’t stopping the company from launching other photo-related projects at the same time.

The new service has applications in both Apple’s App Store and the Android Market, but don’t bother trying to download them right now. Like Google+, Pool Party is currently in invite-only beta testing. To get an invite, you either need to know someone using the service or patiently wait for Google to send you an invitation after signing up on Pool Party’s website.

If you count the new functionality of handling photos in Google+ (Instant Upload) as well as Picasa, Google is working on four different photo sharing initiatives. It’s possible that the company will integrate each photo service to work in conjunction with Google+, which former VentureBeat staffer MG Siegler noted in an article on TechCrunch yesterday.

Then again, maybe the company feels threatened by other ambitious photo-sharing apps that have made headlines recently — such as well-funded startup Color, Cooliris’ LiveShare and Facebook’s unofficially announced photo-sharing app. Twitter’s new partnership with PhotoBucket is also worth mentioning.

Screenshots of the Pool Party iPhone app are embedded below. Since I haven’t used the app yet, I can’t say much about its functionality. At first glance, however, it looks a lot like other popular photo-sharing apps.