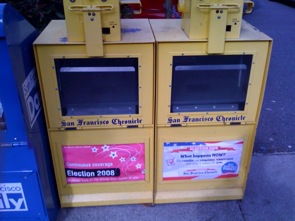 Wow, can President-Elect Barack Obama save the struggling newspaper industry, too?

Okay, probably not, but it looks like Obama’s election has caused a surge in newspaper sales, at least in liberal metropolises areas like New York and San Francisco. The New York Times, for example, tells AllThingsDigital‘s Peter Kafka that it’s rushing 50,000 more copies of today’s edition to press — and The Times (which syndicates VentureBeat articles on its website) already increased today’s print run by 35 percent. Today’s paper will “significantly surpass” sales after the 2004 election.

People are eager to get a physical souvenir, so you can find copies of today’s newspapers available on eBay for as much as $20. (Hey, it’ll probably be worth more tomorrow.) I can’t imagine this will do anything long-term to turn around the print journalism industry’s declining fortunes, but it does show that people will still buy printed newspapers, even if it’s only once every four years.

Anecdotally, it looks like other papers are benefitting too: The newsstands near my Noe Valley apartment were sold out of the San Francisco Chronicle, USA Today and the Los Angeles Times. Kafka reports seeing similarly empty stands in New York.

Of course, interest in the election spurred plenty of web usage — Akamai Technologies, which provides online content distribution for CNN, NBC, the BBC and others, saw a new record in global usage last night, as did CNN.com.