Quora is taking additional steps in its efforts to maintain the civility and safety that its question-and-answer site has a reputation for. Although no specific incident was cited, the company said that it’s implementing changes in how it responds to so-called “bad actors.” Quora’s team will respond faster to repeat offenders and will make it clearer why someone is labeled as a policy violator.

Under this updated policy, Quora expects to move much more quickly to expel those who aren’t adding value to discussions, and are instead opting to harass, bully, and attack others on the site. Those finding themselves in violation of policy guidelines will receive a more “prominent” warning the first time, but successive action by moderators will result in edit blocking and, if necessary, in violators being banned from Quora entirely.

“These actions themselves are not new, but the speed and reliability with which they are delivered makes them much more effective,” wrote product manager Timothy Wingerter. 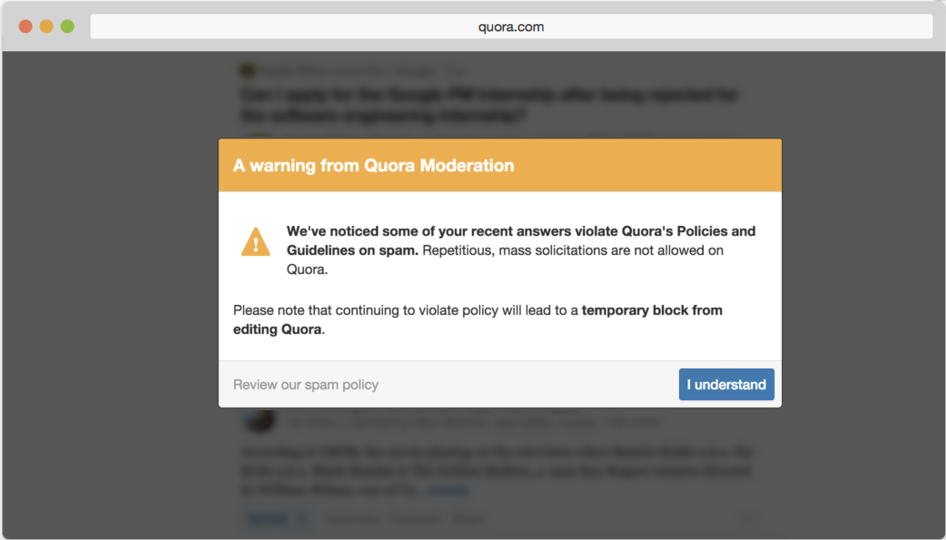 But Quora’s updated policy is more than just a blocking mechanism. After all, with this more rapid verdict being rendered, users should be made aware of exactly why judgement was cast in the first place. Those who have committed a violation will see a pop-up box that cites the specific policy that has been violated. It will also list future consequences should the user continue down their current behavioral path.

In an attempt to prevent abusers from gaining access to Quora, the company has added reCAPTCHA to its sign-up workflow. That’s not the only security improvement that’s being made, although that’s all that Quora has disclosed right now.

This updated user policy comes as the company debuts its own version of an “Ask Me Anything” service called Writing Sessions. The new service could increase the risk of bad actors infringing on a community that has, for the most part, been self-regulating. It also follows an updated messaging policy that was implemented to curb potential harassment by users.

Although Quora isn’t citing any particular instances that have precipitated these changes, it’s likely that some such incidents have occurred, and that the company is being proactive to ensure that it can scale and still remain a viable service for educational discussions.