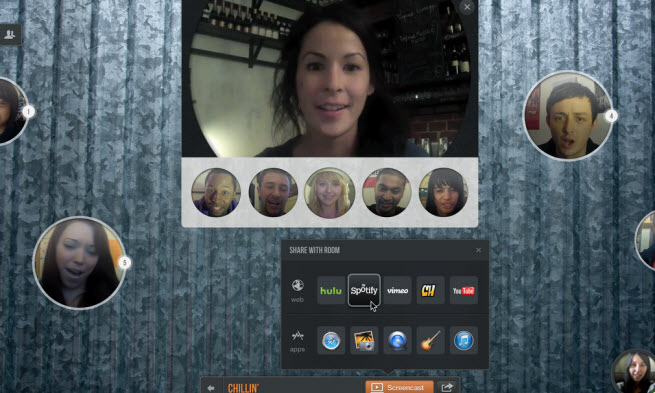 Rabbit has raised $3.3 million in funding for its innovative video chat system.

The San Francisco company wants to reinvent chat by creating a better user interface for grouping people together. The aim is to replace clunky video chat with a reimagined look and feel that is akin to having isolated conversations with a few people at a larger party. As we noted in our debut story about them, the result is very interesting video chat app that you can use to share anything — movies, music, photos, and more — with your friends, transforming video chat into social communication.

“Rabbit’s design and user experience is unlike anything I’ve seen,” said Kevin Rose, the general partner at Google Ventures. “Video chatting is always designed for utility, but Rabbit has created an online social experience that is closer to hanging out with your friends in real life. I can’t wait for the world to see it.”

The founders include Stephanie Morgan, who hails from the video game and music industries. The app is now live as a private beta test on Mac OS X (version 10.7 or higher), and it competes with Google Hangouts and Skype. Rabbit has a very different feel than those, more like something fun than a utility.

“We wanted to take a huge step away from how video chat has been approached,” Morgan told VentureBeat in an earlier interview. “We want to have a meaningful connection with people by doing things together with them. And we want to make this a fun and exciting space.” 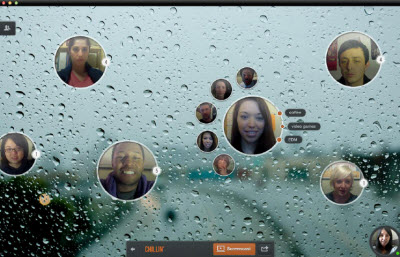 When you log in, you may enter a variety of different conversations, which could be organized around any label. If you click on one, you will hear a mishmash of voices as if you just walking into a party at somebody’s house. You’ll see circles with the faces of people attending the online gathering. You can people-watch before you go in.

You’ll see them talking and moving their faces in real-time. If you hover your mouse cursor over an image, you’ll get more details about the person. If someone is attached to several other circles, that means he is engaged in a conversation with them. You can click to join that conversation as long as it isn’t roped off as private. You’ll find that the sound changes to match the voices in the room. No longer will you hear the murmur of other people in the larger party. Then, you can chat.

The team has paid close attention to the user-interface design. Morgan says that the people are in circles instead of squares so that you don’t see the wall or room behind them. The focus is on the face of the person and what they’re talking about. The person doing the talking is at the top of the screen, right near the webcam on your laptop, so that you can look at the camera at eye level. The other people in the conversation will see your face, and not your chin.

You can talk with an unlimited number of people in your circle. But it’s ideal for a group of around six or seven people. Right now, it’s not easy to do simultaneous listening and talking in such groups in other applications. 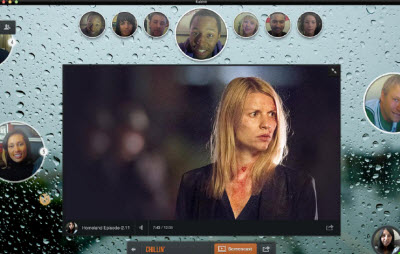 By studying people, Morgan found that young folks like to stay connected on chat services such as Skype for hours at a time, leaving the line to a friend open while they multitask. It’s about spending time together, not just communicating a message and then leaving.

In addition to Morgan, the company has seasoned founders. Philippe Clavel is former technical director at Sony Online Entertainment and Hands-On Mobile. Greg Fischbach, former head of game publisher Acclaim Entertainment, is now an entrepreneur and early-stage investor. And Nicholas Reichenbach is chairman of Guestdriven and was executive vice president of publishing at Magmic Games.

Bebo founder Michael Birch said, “I became incredibly interested in video chat and live social networking a couple years ago when the technology and internet infrastructure looked like it could handle real-time communication – in fact, we even prototyped some concepts around video chat and social ourselves.”

He added, “So, when I first saw Rabbit, I was instantly intrigued. It was like seeing the future of real-time social interaction, one that I believe will be how everyone will communicate and socialize together moving forward. Rabbit’s [user interface] is beautiful and intuitive, and it’s designed to make video chatting fun, which is not how video chat apps are typically designed.”

“Rabbit is one of those things that should have existed before but couldn’t because the technology simply wasn’t where it needed to be,” said MG Siegler from CrunchFund. “In the age of always-on internet, we’re ready for a paradigm shift in online communication and interaction. And this is the team to deliver on that promise.”