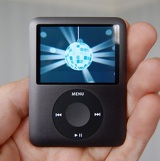 Inevitably, one day we’ll look at the first mp3 players as relics. But if researchers at IBM have their way, that day will come sooner than you may think.

Researchers at IBM have created what they call “racetrack” memory, reports the Times Online. It’s similar to today’s flash memory (the method of storage on current iPhones, iPod Nanos and iPod Touches), but it lacks the moving parts of traditional hard drives (still in use in the larger iPod Classics and older iPods), which means more reliability, smaller devices and better battery life. However, where flash memory is slow at writing data, racetrack memory is very fast.

The real story, though, are the improvements in storage capacity and battery life racetrack memory promises. It could give devices the ability to hold massive amounts of information — as many at 500,000 songs or 3,500 movies on a single iPod, the Times Online notes. Such a device could also go weeks without needing to recharge.

The iPod is, of course, not the only device that would benefit from such technology. Everything from cellphones to handheld computing devices would see significant leaps forward thanks to racetrack memory.

There’s another upside as well: This memory would cost far less to produce.

The technology is still in the exploratory phase, but IBM believes it will be used in devices within the next decade. So much for Apple chief executive Steve Jobs’ old motto for the original iPod Nano: “1,000 songs in your pocket.” Try a half-million.