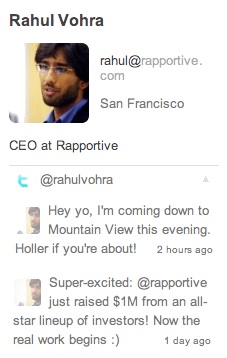 San Francisco startup Rapportive already offers a lightweight way to bring social data into Gmail. And starting today, it will also give users a way to act on that data — specifically, by allowing them to follow, reply to, and retweet other people on Twitter.

This may sound like a straightforward feature addition, but it helps make Rapportive a more active experience. Yes, social email products provide useful information while composing a message, such as a contact’s Facebook and Twitter profiles. But what if you wanted to actually take advantage of that information in a way that goes beyond email? Rapportive already supports adding people as connections in Facebook and LinkedIn. The new integration makes the add-on more useful for navigating Twitter, too, so that you can interact with a Twitter user on Twitter, rather than just quoting them in an email.

As chief executive and co-founder Rahul Vohra put it in a blog post, “Yet to fully understand your contacts, you have to be where your contacts are. … If your contacts tweet, so should you.”

Last month, Google announced that it was going to be offering its own feature, called the People Widget, for bringing social data into Gmail. For now, at least, Rapportive is much richer and more useful. As one sign of that advantage, the company swallowed People Widget, integrating its data into Rapportive itself.

More importantly, the People Widget is currently limited to data from Google services. By offering peeks at a broad swath of social websites, and by offering real interaction with those sites, Rapportive should be able to stay well ahead of Google. Rapportive users can add the Twitter feature here.