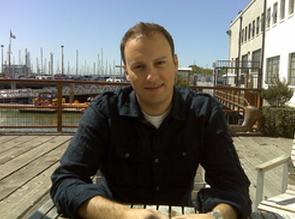 Here’s a startup to watch, although there’s not much to see yet. It’s called Plinky, and it’s founded by Jason Shellen, a former lead developer at blog platform Blogger, which was acquired by Google in 2003. Shellen, who left Google almost a year ago after doing things like creating Google Reader, is by virtue of his Blogger job well-versed in the blogosphere’s behavior patterns.

So, Plinky is building a “content encouragement” tool, Shellen tells GigaOm (where I snagged the above photo of Shellen). More from the article:

I think a lot of attention is being paid to the aggregation and new kinds of social media tools but not enough attention (has been paid) to creation (of the social media). When blogging was getting going, there were lot of interesting ideas, and now the technology has progressed enough that we can try out those ideas.

A common problem when you’re starting out blogging is even knowing what you can write about that others will care to read — maybe Plinky will help solve this. Finding a way to pool together aspiring online content creators sounds like the makings of a potent social network, if not a user-created online publishing company.

However, on his blog, Shellen adds that “[T]his is not a Blogger 2.0 or a MySpace-killer but rather something that should help make using any social site more interesting.”

Unfortunately, Shellen isn’t saying much more right now. Meanwhile, the company has raised $1.5 million in funding from Polaris Ventures and angel investors. Shellen is joined by Polaris investor Simeon Simeonov, who has been developing the idea with Shellen and the rest of Plinky’s small team, and who is the startup’s interim chief technology officer.

This might be interesting to other VCs — Simeonov says that going forward he’s going to be playing a role as serial co-founder in companies, and not act purely as an investor.

Last fall I decided to switch my focus fully to helping entrepreneurs launch companies. Many of the entrepreneurs I’ve talked to are looking for help. There are not that many people in the venture business who both know how to do this and have the bandwidth to do it well. Think of me as a serial co-founder who helps shape the idea, raise capital, build the team and execute. I have founding equity in the companies, which aligns my interests with the entrepreneurs’. In order to have time to partner and engage deeply with entrepreneurs, I have stopped doing traditional investments and taking board seats, although I remain a partner at Polaris and 100% dedicated to building companies that Polaris invests in.

We’ll be watching what the company does. The name, and its founders’ talent and ambition, can’t help but make me think of the cartoon Pinky and The Brain, starring lab mice that every night plot to take over the world.