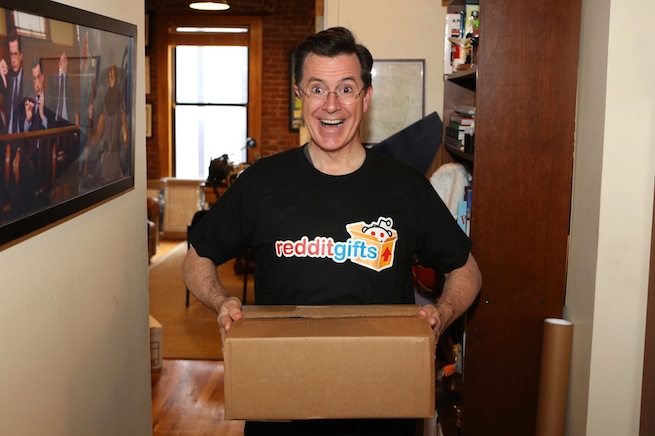 Community news sharing site Reddit has decided to turn its attentions to the men and women of the armed forces by kicking off a brand new gift exchange today.

Ever the patriot, The Colbert Report’s Stephen Colbert (pictured) was among the first to sign up for the new gift giving program.

The new gift exchange is being orchestrated by the Reddit Gifts team, which Reddit acquired for an undisclosed amount in August 2011. Reddit Gifts is probably best known for its efforts in creating the largest Secret Santa exchange to date, but it’s also focused on smaller communities like craft making, book exchanges, and a random “arbitrary” summer exchange.

“The challenge we’re trying to figure out with this (exchange) is, how do we get a connection between these two people?,” Reddit Gifts Manager Dan McComas said in an interview with VentureBeat. “With the existing care-package charities, you’re essentially sending something into a black hole and assuming they’re going to get it.

“We need to do things to help these people’s morale, and a 1-one-1 connection might be the best way to do that,” he said.

The troops gift exchange is much different. Reddit users that are currently serving are asked to sign up on the Reddit Gifts’ site, where they can list shipping details as well as a few things they’d like and some things they definitely don’t want. The site is also asking them to talk a little bit about their service, e.g. how long they’ve served, and what’s been difficult to deal with about it.

Meanwhile, other Reddit users wishing to participate in the exchange can sign up (if they haven’t already) to get matched up with one of the soldiers. Ultimately, the Reddit user is the one who decides what to buy, using the list provided by the soldier as well as a quick scan of that soldier’s Reddit profile activity (if it’s listed).

McComas also pointed out that this particular exchange isn’t exclusive to soldiers in the U.S. armed forces.

“Obviously, the majority of soldiers signing up will be from the U.S., and that’s the easiest to tackle in terms of setting up,” McComas said. “But all soldiers who are currently serving are eligible.”

The gift exchange begins today and will accept new signups through June 18, with gifts going out no later than July 9.

Check out an introduction video to the new gift exchange from Reddit co-founder Alexis Ohanian below.