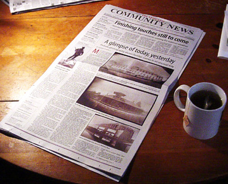 We here at VentureBeat exist in a digital world and cover many digital trends. As such, we can see where a lot of the media we consume is heading at an increasingly rapid pace: online. A group such as the World Associations of Newspapers may be less cognizant — or at least more wary — of such a transition. Nevertheless, it was the central topic the group’s meeting today.

A new World Digital Media Trends report suggests that digital media content and consumption is growing very fast on a global scale. This trend is expected to continue and increase heading into the future. Some of the most interesting data:

That last two points are no doubt troubling news for some — especially those at a Worldwide Association of Newspapers meeting. Many quoted in the AP report seemed concerned about rushing too fast into the digital realm while neglecting the medium that has gotten them to where they are.

“I expect our print edition to be around for a long time,” said Jim Robert, editor for digital news at the New York Times.

Notice he said “long time” and not “forever.”